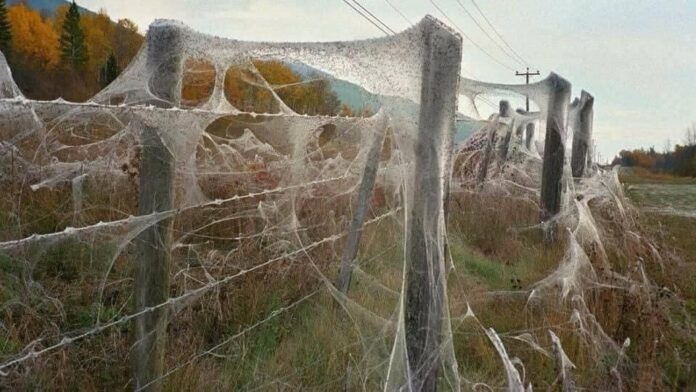 It was in 2008 when a literally bloody rain poured on the community of La Sierra Choco, Columbia. Then a bacteriologist collected the sample of the substance to do the test, he confirmed that it was blood. No explanation was made, but the priest of the town claimed that this was a sign from God to the people.

A similar case also occurred in Sri Lanka, but it was just a blood-red rain that resulted from volcanic ash. The colored particles settle inside water droplets in the air that fall to earth as rain in red color. Apart from red, there have also been yellow, brown, and even black rain that freaked people out as well. But for this bloody rain, it is still a doubt till today.

Fortunately, it was just one cow, not a rainy cow that could have killed people. The incident took place in Japan in 1997 when a Japanese fishing trawler was rescued by a Russian patrol boat. After the rescue, the rescuers questioned them about what happened to their trawler. “A cow fell from the sky and sank us” was the answer that brought the men to jail.

Two weeks later, an embarrassed member of the Russian air force informed Japanese authorities that one of its crew members had stolen a cow. The member took it aboard on his flight which later was thrown out of the plane by the airmen. The cow fell from the plane at 30,000 feet and landed right on the boat of the unfortunate fishermen. The Japanese seamen were immediately released and apologized.

This country has fish rain so often there is a name for it, Lluvia De Peces, meaning literally rain of fish. Coastal cities around the world are familiar with this fishy phenomenon, and even sharks are also reported to have fallen from the sky. The explanation for this occurrence is the whirling wind-like waterspout or tornado that sucks up water surfaces that picks up resident animals.

Fish like eels or sharks as well as other species are known to fall not just in Mexico. People who live in coastal areas in Scotland, Thailand, England, India, the US, and more. Apart from whirling winds, birds are also the carriers of the fish which leads to fishy rain. An example was in Alaska back in 2015 when a thick school of lampreys escaped their predator’s claws and fell on the community.

If we take a quick peek at the Bible, frogs raining down from the sky is the sign of a horrible curse. In science, Waterspouts are the type of tornado that forms over a body of water where frogs hang out. The tornado sucks up the frogs into the funnel and then travels with the tornado which rains on the sky when the tornado stops.

In 1873, a shower of frogs darkened the air and covered the ground for a long distance. Then, more frogs cascaded upon a town in Serbia in 2005. The thing is that some of those frogs belonged to a species that is not normally found in the area. Not to mention those frogs were alive and hopped confusingly in their new home.

Later in 2009, citizens of Ishikawa Prefecture in Japan found dead tadpoles on car windshields and on the ground. Frog rain is a very common occasion actually, but they still one of the weird things that fell from the sky.

It is true that weird things often happen in Florida, and this is one of the weird things that fell from the sky. As a matter of fact, it is the weirdest of them all. Just earlier in 2018, the residents prepared for their snowfall in January which turned out to be a hailstorm of frozen iguanas instead.

Those iguanas are the invasive species in Florida that like to make their homes in suburban tree branches. These cold-blooded lizards literally shut down as the temperature drops which means they cannot hold onto trees. The taller the trees, the more likely they are to fall as if they rain from the sky.

P.S: The iguanas are not dead, they will revive and go back to life when the temperature is warm.

Golf enthusiasts probably thought that they died and went to the heaven of their dreams to wake up to golf balls rain. It was the beginning of the new month of September in 1969 when the residents in town found dozens of golf balls falling from the sky. It was a year with bad weather, and that was the reasonable cause.

Meteorologists explained that a passing tornado gulped up a golf ball field pond as it moved by. Since Punta Gunda is on Florida’s western gulf coast which is home to many golf courses, the explanation is legit. Then that resulted in a rain of dozens and dozens of golf balls on the streets of this town. Can’t help but freak out, the people thought it was some sort of cursing disaster.

Sounds similar to raining man, this is actually raining meat. It was on the 3rd of March, 1876 when a shower of meat fell near the house of Allen Crouch. The meat covered a strip of ground about one hundred yards in length and fifty in width. No storm, no airplane, and the sky was perfectly clear at the time. The two men tasted the fleshy snowflakes and said it was similar to mutton or venison. The only theory given was that it was the chunks of meat from a large pack of buzzards.

A true nightmare for us all is nothing besides walking on the street to notice thousands of spiders raining from the sky. It was not thousands of spiders actually, there were MILLIONS of tiny spiders that fell from the sky in Australia in 2015. We called it Spider Rain, the experts called it Angel Hair due to the silky and hairlike thread the spiders leave behind. Angel my ass, this thing is scary for god’s sake.

Excuse the language, such an event occurs when huge groups of spiders engage in a behavior called “ballooning” at the same time. When ballooning, spiders climb some high area and stick their butts up in the air and release silk, then take off. Some spiders do that all the time, but strong winds or storms collect them as a group to terrorize us people with arachnophobia.

Besides Australia, spider rain also fell in Argentina in 2007. A group of friends was hiking into San Bernardo Mountain when they found spiders of many colors blanketing the ground. There were more spiders along their way up the mountain from which they look up into the sky. Apart from these two countries, spiders also fell in Texas and Brazil as well.

Can’t imagine how frightening for the kids were to be pelted by dozens of earthworms on their bodies during their soccer match. On 4th of March, 2001 was one memorable day for the students who were in the middle of their match. Some kids were laughing while the others went scrambling for cover, eww right?

The coach has collected the worms as evidence, but no explanation is available for that occurrence. No one could blame the bad weather for it was a sunny clear day. It was not the only time for the worms to be weird things that fell from the sky. Six years later in 2007, a woman was crossing the street on her way to work when she was suddenly pelted by worms. But since Louisiana is prone to sudden tornadoes and rain storms, those could be the explanation.

The latest worm rain was in April 2015 in various parts of southern Norway, 4 years after the same rain in Scotland. The disgusting part was that the worms were alive despite they were in the snow of cold Norway. There were also two more worm rains in England in 1857, and Sweden in the 1920s. It was the wind to blame, nothing other than that.