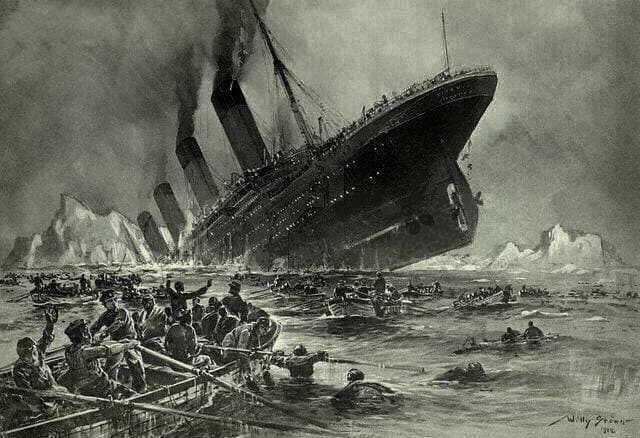 Titanic has always been the first option when we talk about famous shipwrecks, but there are more. Each time a shipwreck happens, hundreds or even thousands of people lost their lives or family members to the sea. Ships have been around for centuries, and shipwrecks are the like the window to their own history. Today, we are going to dive deep into the sea and discuss 10 famous shipwrecks together. Each of these shipwrecks took so many lives with them when they sink, so let’s find out.

The casualty of Estonia in the Baltic Sea is one of the biggest maritime incidents in the recent past. The ship was en route to Stockholm from the Estonian province of Tallinn when it sank. More than 800 people lost their lives in this horrifying incident, and the majority of the bodies were never discovered. The thing is that the cause of the sinking remains controversial as there are many theories about the cause.

The most common reason was the rough weather conditions that the ship encountered during her voyage. Some said the ship was involved with the military, so the bombs were planted by rival countries to destroy the ship. After the disaster, many relatives of the deceased demanded that their loved ones be raised from international waters. However, it was too difficult to raise the entire ship out of the water from the sea floor so it never happened.

This ship was a Portland-class heavy cruiser of the United States Navy, named after the city of Indianapolis, Indiana. The vessel served as the flagship for the commander of Scouting Force 1 for eight years. Until 1945, after the ship had completed a top-secret high-speed trip to deliver parts of Little Boy, it sank. The ship was torpedoed by the Imperial Japanese Navy submarine, and it sank in 12 minutes. The ship’s wreckage was never found until 72 years later in 2017 when the cruiser’s wreckage was discovered on the floor of the Pacific Ocean. There were 1,195 crewmen on board, and around 300 of them went down with the ship. The rest faced exposure, dehydration, saltwater poisoning, and shark attacks while stranded in the open ocean with a few lifeboats. The sinking of Indianapolis is the worst American naval disaster of World War II.

The HMS Victory was a 96-gun second-rate ship that had an accident in the English Channel which caused its sinkage. The ship took the entire crew with her after a large storm had scattered during the night on Black Rock. Frigates were dispatched across the English Channel to search for her where she was last seen but to no avail. The locals said that the wreckage and part of a topmast had been seen on the island’s shores, so the investigation went on. Other wreckage also washed up on Jersey and Alderney, where inhabitants had heard distress guns the night before. Research has backed up anecdotal evidence of the possibility that Victory was carrying gold and silver which could be worth hundreds of millions of pounds. Whether this was true or not, we don’t know.

This Canadian ocean liner sank near the mouth of the Saint Lawrence River after colliding with the Norwegian collier SS Storstad. The reason for the collision was due to thick fog, and it was one of the worst disasters in Canadian maritime history. It took only 14 minutes for the river to swallow the large ship claiming 1,012 lives. Most of the people who perished were passengers while more crews survived the disaster. On several occasions after the incident, several divers successfully recovered many valuables including silver bars, brass bells, and more from the ship.

This was a British ocean liner that was sunk off the south coast of Ireland by a German U-boat. A torpedo struck and explored amidships on the starboard side during her 202nd crossing, and a heavier explosion followed. The explosion was probably closed by damage to the ship’s steam engines and pipes. The Lusitania was carrying a cargo of rifle ammunition and shells which was about 173 tons in total weight. The ship sinkage caused 1,198 people to drown and lost their lives. The death of the passengers on board caused outrage and shock across the world. Some believed it was a major factor in encouraging the US to enter World War II as an ally. However, the US government clung to its policy of neutrality so there was no war happened.

When it comes to famous shipwrecks, the Titanic is always the ship that comes up in people’s minds. Titanic was the largest cruise ship of its time, unfortunately, the “unsinkable” ship sank before making her destination. After colliding against an iceberg on its maiden voyage from Southampton to New York City, the ship sank in the North Atlantic Ocean. This ocean liner carried some of the wealthiest people in the world, nicknamed “Millionaire’s Special”. She sank in less than 3 hours after had broken in half taking hundreds of lives with her. The wreck of Titanic was discovered in 1985 during a US military mission, with each half lying about one-third of a mile apart. In the late 20th and early 21st centuries, artifacts from the ship formed the basis of a highly successful exhibit that toured the world.

The USS Arizona was an American battleship that served many purposes in many different areas. Japanese torpedo bombers attacked Arizona during the Japanese attack on Pearl Harbor, so she exploded violently and sank. Japanese horizontal bombers struck her with several bombs, and some of these caused damage to her after and midship areas. Blazing furiously, Arizona quickly went to the bottom of Pearl Harbor, completely. Over 1,100 crew members and officers lost their lives in this tragic incident. The shipwreck remains is at the USS Arizona Memorial with about 2 million visitors annually.

Not so long after the end of the Civil, The Sultana burst into flames along the Mississippi River. The Sultana was a steamboat that regularly transported passengers and freight between St. Louis and New Orleans on the Mississippi River. The steamboat exploded and sank after its boilers had exploded as a result of severe overcrowding. The thing is that the vessel was designed to hold 376 people, but there were more than 2,000 people on it. The crowd plus with faster river current put increased pressure on its newly patched boilers, causing an explosion which started an uncontrollable fire. Apart from those who drowned, 200 initial survivors died later from burns sustained during the incident. The Sultana incident was the deadliest march disaster in U.S history.

This cruise was a Philippine-registered passenger ferry that sank after colliding the oil tanker MT Vector. Onomichi Zosen of Hiroshima, Japan was the builder of this vessel. The reports said that the cruise was overcrowded so the passenger did not have immediate access to life jackets at all. In addition to that, the ship had no radio so the passengers were not aware of the emergency. The collision caused a fire and explosion, damaging the ship and killing both passengers and crew members on board. Among 4,411 passengers, only 25 survived. It is the deadliest peacetime maritime disaster in history; hence, received its nickname as Asia’s Titanic.

When it comes to the largest loss of life in a single ship sinking history, this ranks number one. The vessel was evacuating German civilian refugees from East Prussia, Lithuania, Latvia, Poland, and Estonia when a Soviet submarine attacked her. The ship left port on the same day it sank, carrying an estimated 10,000 refugees whose hope was to escape. Although rescue efforts began within minutes of the ship’s initial SOS call, only 1,200 people could be saved. Nowadays, it is one of the largest shipwrecks on the Baltic Sea floor that has been attracting interest from treasure hunters.