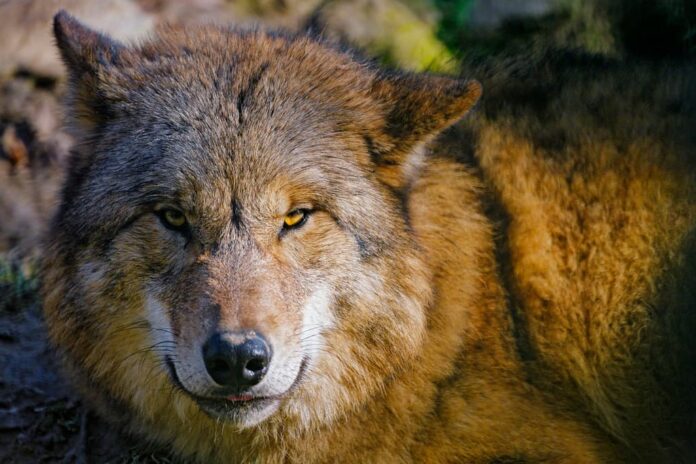 The blue wildebeests are huge ungulate mammals, and they are herbivores. However, they are very territorial animals as the adult males occupy their territories from a month up to the entire year. The physical size of their territories ranges from one to two hectares in the open plains, bushveld, and dry woodlands. The males mark their boundaries using dung heaps, preorbital gland secretions, hoof scent glands, and pawing of the earth. They also use actions to advertise their territories as well. The territorial male will stand at an erect posture, profuse ground pawing and horning, frequent defecation, and rolling on his back and bellowing the sound “ga-noo”.

The male blue wildebeests become territorial at the age of four or five. And you can notice their behavior when they stand around alone being very vocal. The size of the territory will depend on females as well as food and water availability. When competing over territory, males grunt quite loudly as well as make a thrusting motion with their horns. They also perform other displays of aggression to chase the intruders away from their land. Most fights include horn clashes and hardly ever turn very violent. However, the fighters could get injured or even break their horns. Without his horns, the male will be disadvantaged for the rest of his life and will struggle to fight for territory again.

If the group comes across another chimpanzee, they will attack it in an attempt to kill the chimp. The attacks do not only occur on male chimps but also the females and their young as well. There have been recorded the attack of the group on female chimpanzees and their young before eating their remains. Same to their own kind, chimpanzees will also attack humans for many different reasons. Their attacks are brutal, and mostly result in severe injuries as well as fatalities due to their bites and scratches.

Spend most of their time in the water, hippopotamus is a water-loving animal that is native to Africa. Hippopotamuses are the third largest living land animals, and they are also very aggressive as well. The thing is that hippopotamuses are territorial only in water, where a male presides over a small stretch of river. A pod usually contains around 10 hippopotamuses while some can be as large as over 100 members.

Hippos mark their territory by defecation. Hippos spin their tails back and forth rapidly to jettison the waste in all directions while depositing the feces. Once an intruder approaches their territory, they “yawn” as a threat display. If that intruder does not step out, then they will show their aggressiveness right away. A hippopotamus can run very fast, and they kill more people than any other mammal. With great speed and strong canine, the hippopotamus is not an animal that you want to mess with.

Jaguars are the third largest big cats in the world, and they are very territorial. This big cat species lives alone, and they define their area by marking it with their waste or clawing marks. Adults only meet to court and mate before they carve out large territories for themselves. The territory of females ranges from 25 to 40 square kilometers, and may overlap. However, the territory of females may avoid one another. As for the males, their territory can contain those of several females, and they usually live in tropical rainforests, savannas, and grasslands.

After mating, the female jaguar will take care of her babies on her own in her territory. Usually, the litter consists of one to four cubs that are blind and helpless at birth. The mother stays with them and defends them fiercely from any animals that may approach even their own father. Young jaguars learn to hunt by living with their mothers for two years or more. Jaguars are great runners and swimmers, and stepping into their territory is not an ideal thing to do. With those sharp canines, one bite in the neck and the prey is done for.

Just like jaguars, leopards are solitary and territorial animals. These large African cats will defend their territory against other leopards of the same sex. Each sex defends its territories based on different needs. Females select and defend their territories based on the density of prey and availability of den sites. While males select theirs based on prey density and availability of females. That is why a male territory may encompass multiple female territories. The size of a leopard can be anywhere between 5 to 1000 square kilometers. These large cats have excellent senses, and they have different methods to mark their boundaries.

Both sexes use urine to mark their territories, and the males often scrape the ground to transfer the scent of their urine onto their feet. By doing so, he will be able to carry the sent during his territorial boundary patrols. Leopards also rub their faces and necks on vegetation as they are walking their territory as well. This activity is to transfer the secretions from a cheek gland that carries olfactory messages to other leopards. As solitary hunters, leopards cannot afford the risk of injury at all. The combination of the olfactory, visual, and vocal methods is to advertise their territories while warding off intruders to avoid altercations.

Also go by the name Sea Iguana or Saltwater Iguana, marine iguanas are very unique among modern lizards. Despite their large size and scary-looking appearance, marine iguanas are actually harmless; and they mostly feed on algae only. Marine iguanas are among the territorial animals because they are very aggressive when they defend their territories which is during the breeding season. This behavior lasts for up to three months, and they sometimes fight other males during this period. The size of their territory can be up to almost 40 square meters, limited by geographic features like boulders or crevices.

Large male marine iguanas are very territorial while medium-sized males are not so much. Their encounters are usually when they walk along beaches looking for females, and the smaller males enter the large males’ territories. To threaten the intruder, a male will bob his head, walk on stiff legs, and raise the spiny crest along the back. At the same time, it also opens its mouth to reveal its reddish interior to chase the other males away. If the other males don’t leave, then there will be fights among them. Fights between males usually last for hours, involving periodic breaks. The winners stay, and the losers assume a submissive position and retreat.

The red fox is the largest among fox species, and they are among the aggressive territorial animals in the wild. Red foxes have keen senses of sight, hearing, and smell which they use to advantage in avoiding enemies and hunting prey species. Being territorial animals, red foxes mark their territory by using urine. A male red fox raises one hind leg and sprays his urine forward in front of him. As for the female red fox, she squats down so that the urine is sprayed on the ground between the hind legs. Red foxes have up to 12 different urination postures that allow them to precisely control the position of the scent mark.

In areas where red foxes are abundant, it appears that territories overlap by two or even three different family units. If they happen to meet each other in a marking of territory, fights will not occur actually. Usually, red foxes will only attack strangers instead of neighboring foxes. If a fox leaves its territory for a period of time, another fox is likely to move in and establish its own territory in that area. Red fox is normally solitary animal, but it won’t completely isolate itself from other foxes. Also, they don’t hunt in packs as wolves do. However, they will form a pair that can last for life since they are monogamous animals.

Rhinoceroses are solitary animals that prefer to live independent life. Among members of the rhino family, the black rhino has the reputation of being extremely aggressive and charges readily at perceived animals. All rhinos demand their own territories, especially the males. The male rhinos mark their territory by dragging their feet through their dung, scattering it all over the place. At the same time, they also urinate on bushes and trees to claim every single space in their territory. Rhinoceroses make extensive use of their sense of smell to communicate to and with others that are present. Therefore, they are aware right away once they enter the territory of another rhino.

Rhinoceroses have very poor eyesight, so they usually charge to scare off the intruders. Such blind charges can lead to them running straight into a tree or other foliage. When running, a rhino can reach speeds up to 55 kilometers per hour. Rhinos can change direction quickly and deftly even when running despite their size. So running away from one is not quite easy at all. Territorialism among rhinos effectively limits the number of animals that can inhabit a specific area. If rhinos are forced to co-exist in a space that does not allow them to establish their own territory, the results are bad. Those include severe stress, injury, aggressive fights, and even death.

Also, wolves increase the rate of scent marking when they encounter the marks of wolves from other packs. Only wolves in packs mark their territory, lone wolves rarely mark territory because they usually hunt smaller animals for food. Speaking of food, wolf packs will avoid being around each other unless they are fighting for food during a food shortage. Sometimes boundaries of territories may overlap, but separate packs will usually avoid one another as much as possible.

The interesting thing is that the territory belonging to a certain pack of wolves may remain for so many generations. Younger wolves will often inherit the territories belonging to their elders from one generation to another. Wolves occupy their territories and will defend them against other trespassing wolves or other canids. Usually, a defense requires no more than intimidating an outsider with growling and baring of teeth. If things get serious, there will be a chase or even a physical confrontation.

Although they are generally quiet animals, wombats can be very aggressive and territorial when it comes to boundary violations. These territorial animals mark their home range by grunting at intruders, rubbing their scent on trees, and scattering cube-shaped droppings. Their unique dung shape helps keep the markings in place around their territory. Wombats have a tough barrel-like body, short powerful legs, and long flat claws which allow them to dig burrows. A common wombat may have up to 12 burrows in its home range with 3 to 4 main burrows. A main burrow will house a network of sub tunnels which includes multiple entrances and sleeping quarters. When angry, wombats make hissing sounds to drive the intruders away.