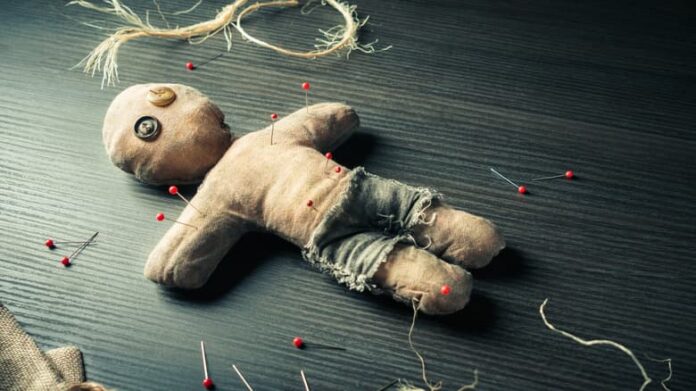 When a person dies, sometimes he or she is not always willing to leave the earth for the next incarnation. The reasons include unfinished business or earth or they simply don’t realize that they are dead. So the souls stay on earth because they need energy resources to finish something before they leave. They start to take energy from humans, and users of drugs or alcohol are the victims. The souls usually look for someone weak and manipulable, and those people are perfect for them.

Nowadays, curses are one of the most popular forms of magic because they are so easy to create and implement. When someone puts a curse on another person, that one individual will suffer for a long time from the curse. The most common ones are the curse of bad luck which means the person will face unfortunate things. The curse invokes a supernatural power to inflict harm or punishment on someone or something.

Curse is also a spell that causes harm, and there are many categories of curses as follow:

This type of spell causes an inability to act by manifesting psychologically as depression or anxiety. In other words, it makes none of your plans amount to anything while everything just goes downwards. If you find yourself completely unable to act upon your decisions, you might be under a binding.

The spell increases the probability of harm to its target which ranges from bad luck to death. The thing is that there is no rhyme or reason for the harm caused, it is just that everything goes wrong. If things keep going awry for a long time, there is a good chance that there is an entropy curse.

Some users of lesson magic want to dispense justice as well as right or wrong, so they use magic. The specifics of these curses are always retributive, and their casters love to make the punishment fit the crime. So if the target is a thief, someone will steal something back from them. If you find yourself suddenly and consistently a victim of your own medicine, you might need to look for a nearby witch.

This is a catch-all category for things like “a sending of rats” or the “evil eyes”. These spells are usually specific, and they have a great deal of lore associated with them. This type of spell is usually spectacular in its results like there is nothing subtle about dozens of rats invading your house. So when life starts to feel like a horror movie, you might have a special-purpose curse.

This is one of the worst types of black magic because hallucination is very dangerous to people. Also known as magic of illusions, there are two types of it including presenting tricks and bewitching the crowd’s eyes. The presenting tricks can be done with the assistance of a Jinn when the sorcerer summons one and forces him to perform orders. The sorcerer then sends Jinn to the chosen victim to cause demonic possession. The victim then sees things, scary things that lead him/her to do weird stuff or kill themselves.

Another type is bewitching the crowd’s eyes to make the victims look at things differently from reality. For example, the victim sees blood in the sink as she washes her face while people around don’t. That also includes the moments they see people or scary beings follow them when they are walking in the crowd. This kind of magic is usually displayed in places having huge gatherings. The victims also end up going insane or killing themselves because seeing things following them is unbearable, of course.

This type of black magic is practiced in many cultures to make a person fall in love with another. Anyone can cast black magic for love, and it works best between two opposite sexes. People usually go to the sorcerer to get someone whom they love to love them back when they have no interest. Another case is when a person wants to get the spouse of another person to leave their partner for them. Such magic also unites back former lovers or couples as well as parents and children.

When a spell is a cast, the victim will fall head over heels for that person and will do anything for them. It does not take long for the magic and the spell to work. And all you need is the name or the hair of the person you want to cast the spell on. Some spells can be helped by other sorcerers while sometimes the spells are so strong no one could help.

Basically, ritual is a religious or solemn ceremony consisting of a series of actions performed according to a prescribed order. As for the purpose of black magic, rituals are used to create entities from other dimensions and realms to harm others. Sometimes the rituals also involved with scarification of animals or even people as part of black magic.

This refers to the type of magic that makes use of spirits to mentally torture a person. Those who desire to put this black magic to use are the ones who are driven by anger, hatred, and jealousy. The victims get weird dreams in which savage beasts are attacking them or hear someone calling their names. This will happen every day at a certain time especially at night to the point the victims lose their control. Eventually, the victims will either go mental or commit suicide because of the voices they hear.

Many people are aware of this form of black magic, and it is one of the strongest types of black magic. The thing is that voodoo is not only a form of magic but also a true religion that people practice. People believe that they can call the spirit of the dead into the living world to bless or curse people. One way to call one of the spirits into action is to create an image such as a wax doll.

The doll is to represent the person who is the object of the curse or blessing. Then you treat the figure the way you want the spirits to do either to bless or to curse. Rituals of voodoo are more aggressive than witchcraft, and individuals can cast the spells. Voodoo rituals are very active and sometimes involve animal sacrifice as well as spiritual possession. Voodoo has its origin in Western Africa, and it is a common faith in Nigeria, Benin, and Togo. It is also a common religion in Haiti and Cuba today.

The innocent soul seldom finds out that he /she has become a victim of Black Magic. There are certain stages that a person can notice when they are the victim of black magic including: