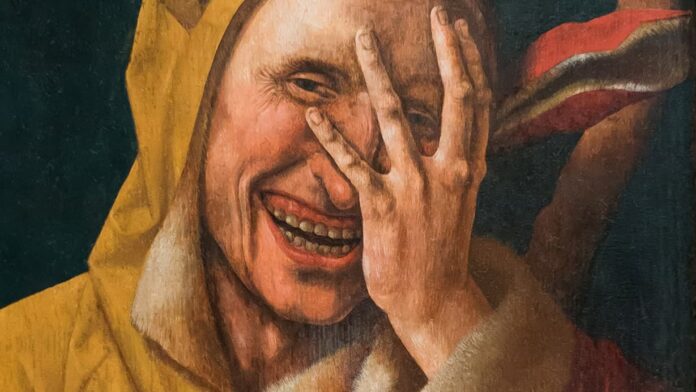 There are also people in modern days who died from laughter, and Alex was one of them. On 24th March, 1975, Alex Mitchell laughed uncontrollably while watching the episode Kung Fu Kapers from the TV series The Goodies. After 25 minutes of continuous laughter, Mitchell slumped on the sofa and died from heart failure and a stroke. His wife later sent a thank-you note to The Goodies for giving his husband pleasant moments before his death.

In ancient Greek mythology, Calchas was a gifted soothsayer who had been blessed by the god Apollo with the gift of prediction. He could see the future from the flight pattern of birds and could soothsay by interpreting the entrails of enemies during battle. Too bad he couldn’t predict his own death. One day, his rival prophesied that Calchas would never drink wine produced from the grapes he had planted.

Some times later, the grapes ripened and were made into wine. Calchas then invited the other soothsayer to the first tasting and lifted a cup of wine made from the grapes he planted. Then he started laughing at his rival’s failed prophecy, he ended up laughing so hard that he choked to death. He died before he got to taste his wine, turned out his rival’s prophecy was true.

Here we have a Greek man who died from laughter in a ridiculous way. Chrysippus excelled in logic, the theory of knowledge, ethics, and physics, and he even created an original system of propositional logic. He died at the age of 73 when he was watching a donkey eating some figs. While watching, he cried out: “Now give the donkey a drink of pure wine to wash down the figs.” The slave did as ordered, and Chrysippus found it so funny he laughed to his death.

It was in the middle of the night when Damnoen Saen Um’s wife woke up by the laugh of her husband. The 52-year-old ice cream truck driver laughed in his sleep for two minutes before he stopped breathing. His wife tried to wake him up, but he kept on laughing to his death. An autopsy suggested that he might have had a heart attack as he was laughing while sleeping. It is possible to have a heart seizure while laughing or crying too hard while we are asleep, according to Dr. Somchai Chakrabhand.

Back in 1893, a well-known farmer called Wesley Parsons was joking with his friends when he was unable to stop. He laughed non-stop for nearly an hour, and he died two hours after the incident due to exhaustion. The very common questions are what was the joke about and how funny was it that it could kill a man. Until today, no one knows what the joke was and no source has revealed that joke.

The king was born in 1356, and he began ruling the country in 1396 after his brother died sonless. In 1410, King Martin of Aragon died due to a lethal combination of laughter and indigestion after hearing a joke. That was a killer joke, indeed. That day, he found himself feeling unusual after having a whole goose for dinner. He then went to his bedchambers and called his favorite jester who was a gent named Borra to cheer him up.

It might have taken the gentleman a while to arrive because when he arrived, King Martin asked him where he had been. Borra replied: “In the next vineyard, your majesty, where I saw a young deer hanging by his tail from a tree. As if someone had so punished him for stealing figs.” King Martin found the answer to be so funny he laughed uncontrollably for THREE HOURS. Eventually, he fell out of the bed as he was laughing and he died as he hit the floor.

We all want a good laugh sometimes in our life, and going to the theater to watch a play was popular before. One day in April back in 1782, Mrs. Fitzherbert went out with some friends to see The Beggar’s Opera on Drury Lane in London. The play starred a popular actor named Charles Bannister who appeared onstage as a drag wearing women’s clothes. The entire audience burst into laughter because the lantern-jawed and poorly shaved middle-aged man was wearing a dress and holding a fan.

For some moment, the audience eventually collected themselves, wiped the tears from their eyes, and resumed watching the play. But Mrs. Fitzherbert was unable to suppress the laughter that seized her at all. She could not banish the figure from her memory, and she was thrown into hysterics which continued without intermission. She continued to laugh but overcame by leaving first, then she died in the morning two days after she watched the play.

In 1989, a Danish audiologist died while he was watching a movie called “A Fish Called Wanda”. During a scene featuring John Cleese in which the character has food stuffed into his nose and mouth. The man laughed so hard that his heart rate was somewhere between 250 and 500 beats per minute. His uncontrollable laugh led to a fatal heart attack at that very moment which caused his death.

He was an Athenian poet and playwright in Greece, and he was a very successful man. He repeatedly won victories over his young contemporaries and rivals with his remarkable work. Lucian’s version of the death of Philemon has the poet himself dying from laughter while an action narrated Philemon’s death in his sleep. He died from laughing at the jest he had prepared in the year of 263 B.C.

Pietro was an Italian author, playwright, poet, satirist, and blackmailer who wielded influence on contemporary art and politics. He also influenced modern literary pornography as well. In 1556, the man died laughing while listening to a humorously indecent story. That very day, his sister told him a bawdy story that made him laugh extremely hard he fell backward in his chair.

Sir Thomas Urquhart was a Scottish aristocrat, writer, and translator who was best known for his translation of Francois Rabelais to English. He died from laughter upon hearing the news of Charles II being restored to the throne. We don’t know if the laughter was from true joy or if the news itself was a joke to him. But it was that news that had him laughed so hard he died.

Here we have a flourished painter from Greece with a great reputation during the 5th century B.C. His paintings were known for their realism, small scale, novel subject matter, and independent format. According to the record, the painter died from laughing at a humorous way while he was painting the goddess Aphrodite. That was because an old woman who ordered the painting insisted on modeling herself for the portrait. He found it funny and laughed so hard that he died.