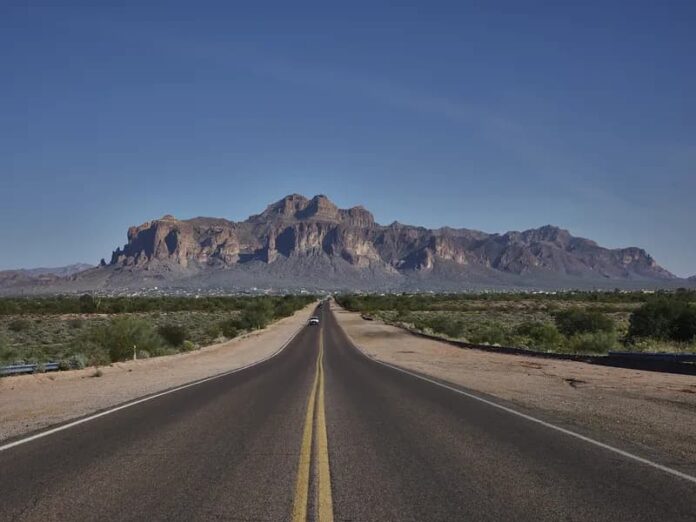 This triangle is the site of a string of 5 mysterious disappearances between 1945 and 1950. Some people suspect a serial killer while others believe more in paranormal activities with the disappearances. Native Americans consider the place cursed, and only use it strictly for burying their dead. Now, it is an abandoned town with the eerie setting of numerous unexplained disappearances, unsolved murders, and bizarre sightings till today. Those unexplained things happened within the buildings and nearby mountains in the area.

The first case was on 12th November, 1945 when 74-year-old Middie Rivers disappeared while he was out hunting. On the way back, Rivers got ahead of the group and was never seen again despite the extensive search conducted. The only evidence was a single rifle cartridge in a stream, it was eerie because River was an experienced hunter and fisherman in that area.

A year later, Paula Jean Welden disappeared while she was out on a hike on the Long Trail. An elderly couple was about 100 yards behind this 18-year-old girl, and they saw her turn a corner in the trail. When they reached the same corner, the girl had already disappeared. There was an extensive search along with a $5,000 reward as well as help from the FBI. There was no evidence of her, and no one knew what happened to this college girl.

The third person to disappear was James E. Tedford who was a veteran, exactly 3 years after Paula’s disappearance. He was visiting his relatives and was returning home on the local bus when he vanished. According to the witnesses, he was still on the bus at the last stop before arriving in Bennington. But he disappeared somewhere between the last stop and Bennington with his belongings still on his seat.

An 8-year-old boy whose name was Paul Jephson was the fourth person to vanish. On 12th October, 1950 the kid accompanied his mother in a truck. His mother left him unattended while she fed some pigs for about an hour to find her son nowhere in sight when she came back. There were search parties to look for the child, but they found nothing.

The last disappearance happened only 16 days after the fourth when Frieda Langer went on a hike. During the hike with her cousin Herbert, Langer slipped and fell into a stream. She told him she would go back to the campsite to change clothes, so he should wait for her there. When she did not return, Herbert made his way back to the campsite and did not see his cousin. And nobody had seen her since, until a year later when her body was found near Somerset Reservoir. That was the area that had been extensively researched, but no one could explain what happened to her.

Bridgewater Triangle is an area of about 200 square miles that has been subject to numerous cryptozoological sightings. Since the 1970s, there have been reports on paranormal phenomena, poltergeists, orbs, balls of fire, bigfoot-like sightings, giant snakes, and thunderbirds. Also, there was a report of a man who saw a giant and ghostly red-eyed dog rip the throats out of two of his ponies in 1976.

Apart from that, there have been many reports of mutilated animals in the region; mostly cows and calves. There were two specific incidents in 1998, one was a cow found butchered in the woods. The other case was a group of calves discovered in a clearing and mutilated as if a part of a ritual sacrifice.

Then there were UFO sightings dating all the way back to 1760 when a sphere of fire was seen hovering over New England. Since then, there have been numerous sightings of unexplained objects in the sky including mysterious helicopters. Also on Halloween night in 1908, two undertakers noticed a giant lantern in the sky for almost 40 minutes before it disappeared.

Back in early 1930, a newsman in Manitoba reported a small Inuit village that had always welcomed people who passed through there. But in November of the same year, everything changed when a fur trapper named Joe Labelle was looking for shelter for the night as usual. He found that all the villagers had gone, and he found 7 huskies dead from starvation along with a grave that had been dug up.

Then he noticed a fire that had been started off in the distance so he made his way toward it. Labelle then discovered that someone had begun the preparations for a meal, but never finished it. The stew was ruined. A village of about 30 people or more was gone overnight with abandoned food, clothes, and weapons. He telegraphed RCMP, and an investigation began.

The officers who had conducted the search came across a plethora of open graves in the village burial ground. Witnesses claimed that the earth around the graves was frozen as hard as a rock. More than that, the officers at the scene saw bluish lights pulsating on the horizon above the village. The men watched until the illumination disappeared, and they said the lights resembled the aurora lights. During the search, there were no additional clues that could lead to the explanation of this event.

Where: Wisconsin to Michigan

Looks like every dangerous water area involves a triangle shape, but some are also on land. Below the surface as the water goes deeper and darker, the mysteries are all there. There are many strange occurrences including shipwrecks, plane crashes, disappearances, and UFO sightings.

The mystery began in 1891 when a schooner named Thomas Hume set off across the Lake to pick up lumber. Almost overnight in a torrent of wind, Thomas Hume disappeared along with other seven sailors. No one could find the boat, and no one knew what happened and why. After a century, strange events happened at steady intervals but the most mysterious one was Rosa Belle. In 1921, 11 people who were all members of the Benton Harbor House of Davis were inside the ship. They all disappeared, and the Rosa Belle was found overturned and floating in Lake Michigan.

After that, there are many more chilling personal accounts related to the legend and the lake itself. Many people were writing about strange weather phenomena as well as great uneasiness when navigating inside the swath of the lake. Another bizarre case was of Captain George R. Donner back on 28th April, 1937.

Captain Donner vanished from his cabin when he went to rest after guiding his ship through icy waters. About three hours after he went into the cabin, a crew member went to alert him that they were almost near the port. The door was locked from the inside, so the mate broke into the cabin to find no one there.

Then in 1950, Northwest Airlines flight 2501 which carried 58 people crashed into Lake Michigan. It was one of the most mysterious cases ever because the plane was never found. All we know was the pilot requested to descend to 2,500 because of a severe electrical storm that was lashing the lake. As he said so, the plane disappeared from the radar, and no plane wreckage has been found till today.

When it comes to mysterious places in the world, San Luis Valley has to be on the list. It is an area that is high in inexplicable phenomena including UFO sightings and countless cattle mutilations. UFO sightings are so common that a woman named Jude Messoline has even set up a UFO watchtower on her property. There were over 50 UFO sightings since 2000, and some of the sightings are observed by dozens of people at a time. UFO sightings are not a believable story, and not many people buy a such thing but there are worse cases.

The most bizarre thing was the tales of animal mutilations from the region itself. It all began in 1967 when a horse named Snippy was found one morning with her brain missing. Since then, there were hundreds or even thousands of strange animal mutilations have occurred there. With all those mutilations, there are several things in common that tell that the same individual did it. First, there was never a trace of blood around the animals, and the animals were all damaged with precise cuts. Also, all of the mutilations happened overnight to healthy cattle; most were horses, not cows.

On top of that, some farmers reported seeing strange lights in the sky the night before finding a carcass. That is why many people believed that the death of their livestock involved with extraterrestrials. Another thing is that no predators like vultures or buzzards found the carcass appealing at all even if some flesh was there.

There were residents who reported that they were being followed as they were driving on the road, even the sheriffs. One man said his car was followed by a top-shaped object while a college student said both his rear tires blew out as he approached a creature. There were two sheriff deputies said that an orange globe followed them, and they would lose their jobs if they wrote reports on it. Until today, nobody knows what caused such things and why.

Superstition Mountains aka The Lost Dutchman’s Gold Mine are a mountain range that holds danger and mysteries. People there claim that more hikers disappear in the Superstitions than in any other mountain range. There is an average of four or five hikers disappeared or died there annually and no one could explain why. The scary part is people have heard strange voices and shadows that emerge from the areas along with various sightings. The legend has it, a German immigrant, Jacob Waltz, discovered a mother lode of gold there back in the 1800s.

He kept the location secret until his deathbed, and he might have told a person this wealthy secret. However, no one could ever find the mine despite the number of expeditions by many people. Some people say that the spirits of people who have lost their lives in search of gold still haunt the mountains. Not to mention that some believe that there is a hole at the top of the mountain that leads to the underworld. We never know what really is in there, and they are still no explanations for the disappearance of people.

The Devil’s aka Dragon’s Triangle is located off the coast of Japan, and it is the site of countless mysterious claims. There are many unexplained phenomena including magnetic anomalies, inexplicable lights and objects, and mysterious disappearances. Also, this area is even considered a danger by Japanese fishing authorities as well as a danger zone on Japanese maps.

Between 1952 – 1954, Japan lost 5 military vessels with crew lost a total of more than 700 people. So the Japanese government sent a research vessel with over 100 scientists on board to study the sea. Unfortunately, that ship also vanished without a trace. That was when Japan officially declared that the area is a danger zone.

That is not all, hundreds of fishing boats were lost around Japan every year in that particular area. No doubt why Dragon’s Triangle is one of the mysterious places and sailors’ nightmares. According to scientists, the Devil’s Sea is one of the 12 Vile Vortices around the world. Vile Vortices are the areas where the pull of the planet’s electromagnetic waves is stronger than anywhere else.