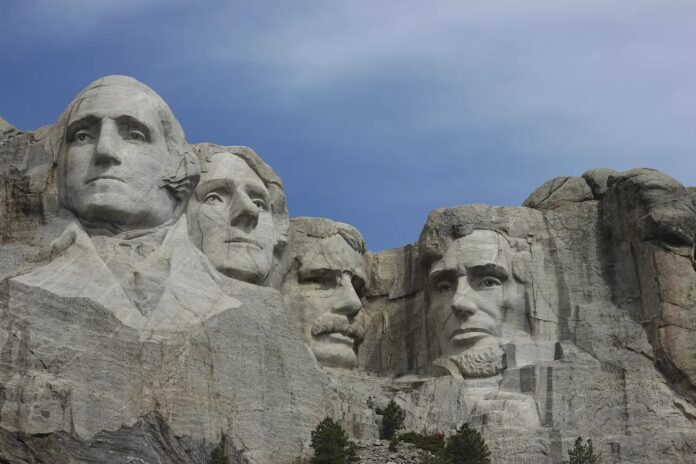 We have seen wonderful sculptures and statues, but Mount Rushmore has a more incredible way to express art. Mount Rushmore is a national memorial where a sculpture of four U.S presidents was carved into granite rock. The four chosen presidents are George Washington, Thomas Jefferson, Theodore Roosevelt, and Abraham Lincoln. These amazing presidents represent the country’s birth, growth, development, and preservation. Mount Rushmore is located in the Black Hills of Keystone in South Dakota. There are around 3 million people visit there each year. Many more interesting facts about Mount Rushmore are below, so let’s see them together.

1The History of Mount Rushmore

The Father of Mount Rushmore was Doane Robinson whose goal was to create an attraction that would draw people in the country to his state. Back then, Robinson contacted Gutzon Borglum who was a famous Dutch-American sculptor for the project. Borglum was the one who identified Mount Rushmore as the perfect location for this wonderful monument. That was because of the fact that the cliff’s height was above the surrounding area and its composition of granite.

The work began in 1927, and completed in 1941 by his son Lincoln Borglum after his death. There were over 400 workers who helped to sculpt Mount Rushmore by climbing 506 steps to the top each day. The original plan for Mount Rushmore was to carve the figures from head to the waist but the shortage of funding didn’t allow for that. The project fund was $250,000 at first but the whole project eventually cost $989,992.32 which was nearly one million dollars.

2Why The Four Presidents?

So the memorial depicts 4 American presidents, and that was because they represent the first 130 years of American history. Borglum did not only choose the location and the sculpting idea but also which presidents to include on the mountain. He had his reasons behind each president he chose, and those are:

Each president’s face is 60 feet high, and Washington’s face was completed in 1934, Jefferson’s in 1936, and Lincoln’s in 1937. Then in 1938, Gutzon Borglum secretly began blasting a Hall of Records in the mountain behind Lincoln’s head. The purpose of the hall was to store the history of the nation and vital documents in a room decorated with mosaics. The Congress found out and then told the artist to concentrate on the faces instead of the hall due to the lack of funding.

Gutzon reluctantly stopped working on the hall in 1939 but he vowed to complete it. That same year he finished the last face of Theodore Roosevelt. The sculptor died in March of 1941, and he left the completion of the monument to his son Lincoln. The completion of Mount Rushmore Memorial Monument was completed on the 31st of October in 1941 which took 14 years to finish. It took quite a long because of the weather and lack of funds.

Related Post: History Behind Every Man On U.S Bills