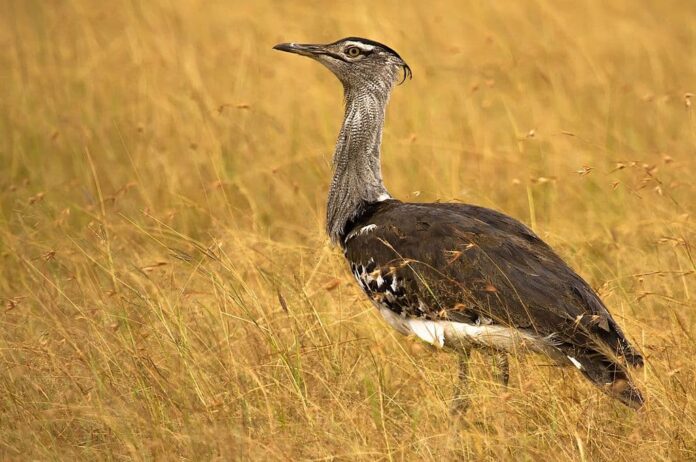 There are many heavy birds out there in the world, the question is which can fly and which cannot. To answer this question, I have done some research and found some of the heavy birds that can still roam the sky. The birds in the list below are large and heavy yet they still can flap their wings and reach the clouds. Some of them are common among us while others are not, so check them out and see them together. Let me know which heavy-flying birds you think are the coolest.

Not many people expect birds with chopstick legs like flamingos could be on the list of heaviest flying birds. Yet here they are, and these birds are also the largest living species of flamingo. At the same time, they are the most widespread and largest species of the flamingo family as well. The greater flamingo inhabits Africa, the Middle East, Southern Europe, and the Indian subcontinent. These pinkish birds prefer areas with shallow water bodies such as saline lagoons, salt pans, large alkaline, saline lakes, and estuaries.

The cool thing about them is that they are very social, and they always travel in groups of up to thousands of members. Just like many birds on the list, their population is also under threat due to human disturbance and lowering water levels. Apart from that, disease, pollution, lead poisoning, and habitat loss also play a great part in taking down their population. The current population is now between 550,000 and 680,000 individuals. Hopefully, their number will come back on track because these birds are so beautiful and fascinating.

Sarus cranes are the tallest flying birds as well as among the heaviest flying birds, and they are the nonmigratory species. This species usually form long-lasting pair bonds, and they maintain territories by doing loud trumpeting, leaps, and dance-like movements. The cool part is that they are the symbols of marital fidelity in India because they are believed to mate for life. They even pine the loss of their mates up to the point of starving to death.

You can find Sarus cranes in lowland areas of India and other areas nearby the country. The Sarus cranes are considered sacred, and people usually leave them unharmed. However, their population has now declined due to habitat destruction, hunting, and collecting.

Belong to the stork family, greater adjutants have massive wedge-shaped bills and a bared head as well as a distinctive neck pouch. What makes them interesting is the fact that they share the habit of scavenging with vultures. These two bird species soar together in thermals during the day, and they both feed on carrion and offal. You can find these huge birds in wetland habitats in southern Asia like Bangladesh, Cambodia, Laos, Myanmar, Nepal, and Thailand. They like to spend time in lakes, swamps, pools, and rice fields where fish is available. Unfortunately, this species is endangered now due to the loss of nesting and feeding habitats. Nowadays, there are less than 1,000 individuals of greater adjutant in the wild.

Found in all oceans except in the North Atlantic, these heavy birds are sky roamers in almost every ocean. Wandering albatross is one of the largest birds in the world, and they have the longest wingspan up to 3.5 meters. With such a long wingspan, these birds are capable of remaining in the air without flapping their wings for several hours at a time. This heavy bird species are loud, and they have a large range of displays from screaming and whistling to grunting and bill clapping. The interesting thing about them is that they are night feeders, and they feed on cephalopods, small fish, and crustaceans. Their current population status is vulnerable, and their threats are longline fishing and pollution.

Also known as the largest and most powerful raptor in the rainforest, harpy eagles are also among the heaviest flying birds. You can find them in rainforests, especially in tropical lowlands, and they are common in Brazil, Mexico, Central America, South America, and Argentina. Because they are so large, they can prey on domestic livestock like chickens, lambs, goats, and young pigs easily. These large eagles can lift prey up to equal their own body weight without a single problem. That allows them to snatch a live sloth from tree branches very easily. Despite the fact that harpy eagles occur over a considerable range, their population is not doing so well. Their number is going down due to habitat loss from the expansion of logging, cattle ranching, agriculture, and prospecting, as well as hunting.

Not many people have heard about the name of these heavy birds, probably their names won’t be here any longer. As their population keeps on going down, the great bustards are so close to the brink of extinction. The great bustards inhabit grassland or steppe defined by open, flat, or somewhat rolling landscapes. You can also find them in undisturbed cultivation or areas with cultivated crops like cereals, vineyards, and fodder plants. I am just glad that I have found this bird and brought their name here now before they are gone. At least you know that the great bustards are one of the heaviest birds that can fly.

Being the largest member of the pelican family, Dalmatian Pelicans are also heavy birds that can fly. These pelicans are elegant soaring birds, and they fly in flocks with graceful synchrony. Just like most pelicans, this species is also silent most of the time. The birds can be fairly vocal only during the mating season which involves deep vocalizations like barks, hisses, and grunts. Dalmatian pelicans usually live in lakes, rivers, deltas, and estuaries, and they usually stay on ice-free lakes during winter. Their population has declined dramatically due to poaching, shooting, habitat destruction, and lack of food during frigid winters.

There are many species of swan, and all of them are heavy and of course, are able to fly. Swans are actually the largest extant members of the waterfowl family, and they are among the largest flying birds. You can usually find these noble birds in temperate environments, and they are migratory birds. Swans feed both in water and on land, and they are almost entirely herbivores because they feed on aquatic animals sometimes.

These monogamous birds are very protective parents, and they will viciously attack anything they perceive as a threat to their chicks. If you wander around their nest, near their eggs or chicks, get ready to run for your life. These birds have teeth, and they are not afraid to use their bill to poke you.

Fun Fact: Swans mate for life, but they do divorce sometimes due to nesting failure or a dead mate.

Here you are looking at the largest flying bird native to Africa, and it is the heaviest living animal capable of flight. When they are not in the sky, these birds are ground-dwelling birds and opportunistic omnivores. In this species, the males can be twice as heavier as the female. The thing is that male kori bustards attempt to breed with as many females as possible. Yet they take no part in the raising of the young at all, such irresponsible fathers, right?

You can find them throughout southern Africa except in densely wooded areas because they need a lot of open space to take off. Sometimes they are very shy birds, and they often run or crouch at the first sign of danger. While some other times, they can be completely fearless of humans. They were classified as game birds before, and people hunted them so much that their number decreased. These birds are scarce, and they are now listed as Vulnerable due to the low number of their population.