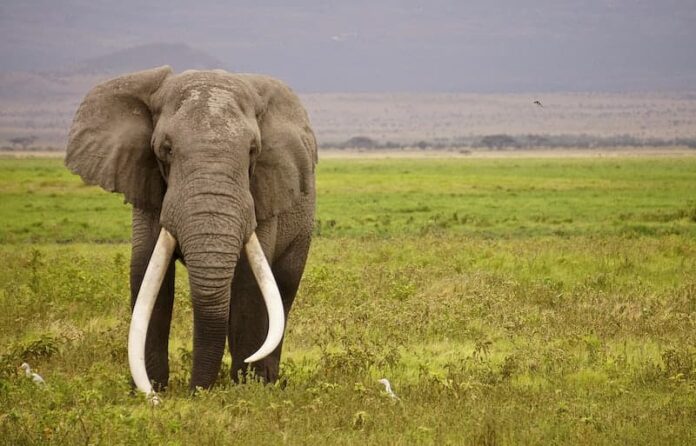 Water Buffalo or Domestic Asian Water Buffalo is a large bovid originating in South Asia, Southeast Asia, and China. Their horns grow downward and backward, and they are also known to have the longest horns than other bovids as well. Currently, these buffaloes are endangered with an estimated number of less than 4,000 left in the world. Their main threats are habitat loss, hunting, disease, and interbreeding with domestic buffalo. But you can still find them in Cambodia, Thailand, India, Bhutan, Myanmar, and Nepal.

Wild yaks are heavily built animals with bulky frames, sturdy legs, and rounded cloven hooves. This type of wild bovid has long shaggy hair with a dense woolly undercoat over the chest, flanks, and thighs. The hair is for insulation against the cold because they live in northern Tibet which is usually cold.

Wild yaks are herd animals, and a herd can contain up to several hundred individuals. They become very aggressive when defending their young or during the rut, but they generally avoid humans and may flee for great distances if approached. Currently, wild yaks are classified as vulnerable while it was previously endangered before. Their threats are poaching, interbreeding disturbance, and diseases.

Gaur aka Indian Bison is the largest extant bovine as well as a member of the heaviest land animals in the world. Gaur is a strong and massively built species with a high convex ridge on the forehead between the horns. With such a large size, their only true enemies are saltwater crocodiles, tigers, and us humans. When threatened, gaur will frequently make a circle around the young and more vulnerable members of the herd to protect them. They also have been known to form a phalanx (close formation of gaurs) and walk towards tigers to scare them away. Pretty tough, aren’t they?

African Buffalo aka Cape Buffalo is a large African bovine that is well known for its horns and dangerous reputation. These buffaloes are very strong and capable of defending themselves from predators like lions and large crocodiles. Apart from being one of the heaviest land animals, they are also one of the most dangerous animals in the world.

These cape buffaloes have been known to gore and kill more than 200 people every year in the African game “Big Five”. They are not domestic cattle that people can tame or domesticate, and their unpredictable nature makes them highly dangerous to humans. People often hunt them for fun and trophy, and their population is widespread with about 900,000 in numbers

Not everyone would expect that these slender animals can be among the heaviest land animals in the world. That is because most of their weight is on their long neck, so no doubts why they are so heavy. On top of that, a giraffe has a very large heart in order to pump blood all the way across its long neck to the brain. That is not all, the length of their intestine is also very long; about 79 meters to be exact. Giraffes are one interesting animals, and you can find them in savannas and open woodlands.

Here you are looking at the largest animals in the Americas with another title of heaviest land animals on earth. A bison has a shaggy and dark-brown winter coat along with the tough appearance of its body. American bison live in river valleys as well as on prairies and plains. Usually, their typical habitat is open or semi-open grasslands, semi-arid lands, and scrublands.

These big boys will not be afraid to charge and attack a human if feel threatened. However, bison were hunted by humans to near extinction back in the 19th century but they make a comeback further from extinction now. The only main enemies of bison are wolf packs since they often attack the cows and calves of their group.

Hippopotamus aka Hippo is a land animal that prefers most of its days in the water. Hippos usually emerge at dusk to graze for several hours before going back into the water. They usually inhabit rivers, lakes, and mangrove swamps in a group of five to thirty females and young.

The unique thing about hippos is that they sleep underwater and then rise to breathe without waking up. The one thing to note is that these herbivores are very aggressive, and they have a reputation for charging and attacking boats. People have been killed and injured a great number so far, so be careful when you see one.

The second heaviest land animals are also elephants, but from another species. Asian elephants are the largest land animals in Asia, and they are currently an endangered species. That is because of the loss of habitat, habitat degradation, fragmentation, and poaching. People also hunt for their tusks which the elephants use for digging for water, salt, rock, and defending.

Just like African elephants, they also need to eat a lot of vegetation per day; 150 kilograms to be exact. These elephants spend more than 2/3 of each day feeding on grasses, bark, roots, leaves, and stems. They also live close to sources of fresh water because they need to drink water at least once a day.

After elephants, white rhinoceros are the next heaviest land animals on our planet earth. This type of rhinoceros are herbivore grazer, and they feed on grass and grains along with a lot of water. The one thing you need to know about these big boys is their speed. White rhinoceros might appear to be large and slow, but their top speed can be up to 40 miles per hour. But they don’t usually attack people unless provoked, and people are the ones who hunt them to an endangered level actually.

African elephant has 3 species, one of which is called the Bush Elephant which is the largest and heaviest land animal in the world. This elephant species is also very tall compared to other elephants throughout the world. So elephants are herbivores, and they use their trunks to pluck leaves while using their tusks to tear branches.

An African elephant can eat up to 450 kilograms of vegetation a day along with 50 gallons of water. Another interesting thing is that these elephants are high in intelligence, and they are capable of solving problems, establishing communication, and connecting emotions. Unfortunately, their population has declined due to hunting for tusks by people.