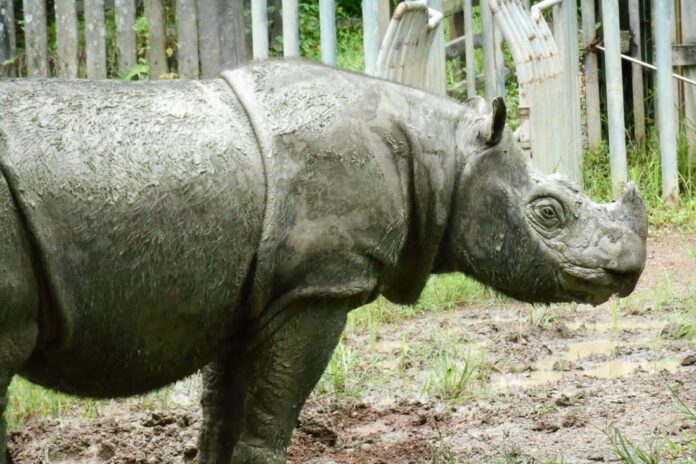 Back in 2008, wildlife experts in Malaysia captured a male Sumatran rhino nicknamed Kretam on a palm oil plantation. Unfortunately, he died on 27th May this year, after months of declining health. This leaves Iman who is the only captive female in the whole country. The loss of Tam has become a severe blow to the survival of this critically endangered species. There were as many as 800 Sumatran rhinos in the wild back in 1986. And there were fewer than 80 by 2018.

“It is with heavy hearts that we share the tragic news that Tam, Malaysia’s last male Sumatran rhino, has passed away.”, the Borneo Rhino Alliance (BORA), one of the organizations caring for Tam, announced via social media. “We will share more details in due time, but right now we need some time to mourn his passing.”, he continued.

When captured in 2008, researchers hoped that Tam would contribute to the efforts to breed more Sumatran rhinos. Tam died without reproducing, his sperm was proved to be of poor quality. Tam and Iman had been together for years, but Iman has never given birth. She was found to have a ruptured tumor in her uterus in December, 2017. There was actually another captive female whose name was Puntung, but she also had health problems due to multiple cysts in her uterus.

The Sumatran rhinos have a relatively long gestation period of about 16 months. Also, adult females have a single calf every four to five years while illegal poaching is too much. That is because of the price of their horns is as high as US$30,000 per kilogram. As for now, Malaysia’s sole remaining hope for producing new rhinos lies in the effort to artificially inseminate Iman’s eggs with a breeder’s sperm.

Related Post: Animals That Are Extinct In The Last 100 Years

The Unexpected Way To Construct Skyscrapers