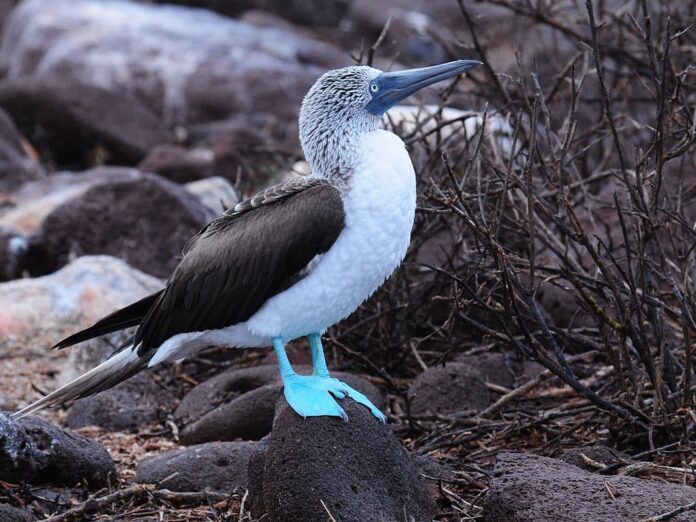 Adorable and unique, blue-footed booby is one type of marine bird that not everyone of us is familiar with. This bird specie is native to subtropical and tropical regions of the eastern Pacific Ocean. You can recognize them right away by their distinctive bright blue feet that is also their sexually selected trait. Due to the fact that blue-footed booby is very unique and not so well-known, we are here to introduce you to them today. Below is some information and facts about blue-footed boobies, don’t forget to share your thoughts with us.

The fascinating thing about blue-footed boobies is that they are way better at swimming and flying than walking. These birds always appear to look clumsy yet cute on land as they walk. As a matter of fact, the name “booby” derives from Spanish term “bobo” which means stupid or dummy. However, they are totally pros when they are in water especially when hunt for food.

With their cigar-shaped body and narrow wings along with long pointed tail, these birds are noticeably agile in water. They either zip underwater for fish from a floating position or make great dives from as high as 24 meters in the air. Once they spot a school of fish, blue-footed boobies folds their wings back and turn to torpedo-shaped predators.

More than that, they have permanently closed nostrils and they breathe through the corners of their mouth when above water. These remarkable birds are so fast they can plunge into less than 2 feet of water, pulling out of a dive at great speeds. As for the diets, they feed on sardines, anchovies, and mackerel. The coolest part is that blue-footed boobies can scour the water for fish easily with their excellent binocular-style vision.

During mating season, male blue-footed boobies display their feet in an elaborate mating ritual. They lift their feet up and down while strutting before the female in order to show off their fabulous blue feet. The brightness of the feet decreases with age, and females tend to mate with younger males. That is why the females pick up the one with the bluest feet as their mates. The interesting part is that chicks raised by brighter feet father grow faster than those who raised by father with duller feet.

Blue-footed booby usually lays one to three eggs at a time, and their nests consist of bare black lava. Both parents take care of their chicks feeding and protecting them until they are about two months old. While nesting, the female will turn to face the sun throughout the day so that the nest is surrounded by excrement. After two months, the chicks will be able to survive on their own with no longer need from their parents.

The sad thing is that there are concerns of the population decline of this marine bird species. One of the problems is the trouble in breeding that leads to the slow declining of their population. Another reason is the decline of sardines, one of their main diets, which affects to the success of their breeding. Hopefully, things will get better and their population will come back.