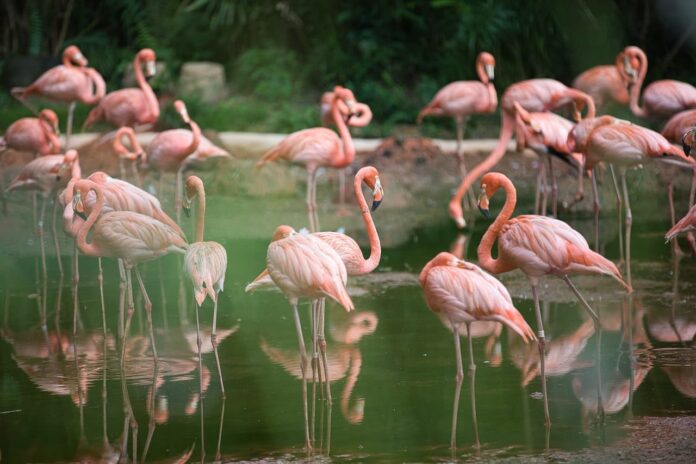 Pink is not a common color for animals, but flamingo is one of the most fascinating creatures with this color. There are many cool things about flamingos that you might not know about. In case you want to get to know this cute flying bird species a little more, we have some facts about them today. There are 6 species of flamingos, and they live in shallow lakes, mangrove swamps, and sandy islands. More facts about them will be below, so feel free to check them out.

1. Color of their feather is the result form their diet, pigments in their food known as carotenoids. The color pink comes from beta-carotene in the crustaceans and plankton that flamingos eat. That is why some zoo flamingos turn white because their diet is not supplemented with live shrimp.

2. The feathers under their wings are black, you can only see them when the birds are flying.

3. Flamingos hold their breath while feeding, and their head is positioned upside-down when they eat. They feed by stirring up mud with their feed, and their beaks are designed to strain animals out of the mud.

4. This bird species live in a large group called colonies which consist of up to millions of them.

5. Males and females perform a spectacular courtship dance to attract a mate. The flamingos are monogamous, and they produce only one egg each year.

6. Flamingos are strong but rare swimmers and powerful fliers, and they do fly very well. Many of them migrate for the best food sources or nesting grounds regularly each year.

7. Baby flamingos hatch on a nest made of mud, and they don’t have curved bills until after a few months. Also, baby flamingos are born with gray and white feathers which will turn pink after a year or two.

8. When a flamingo chick hatches, both parents take turns feeding it. First with a special liquid baby food they produce in their throats called crop milk, and the milk’s color is pink.

9. To answer your question, flamingos stand on one leg when they want to rest.