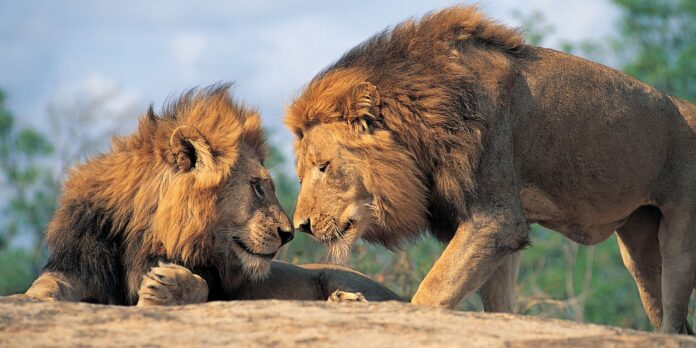 Love has no boundaries, and that is why homosexuality exists not only just with us humans but also with animals. Not many of us know or even think that gay animals exist. Also, not many of us expect that homosexuality could happen amongst animals, and that is why we are here. Lately, scientific research has shown a lot of cases regarding animal homosexuality which is both a surprise and a shock. From large predators to small insects, homosexual behavior is shown at some point. To solve your curiosity about gay animals, check out the list that we provide below.

There are two species of male elephants that engage in same-sex bonding and mounting which include African and Asian elephants. They usually express their affection by kissing, trunk intertwining, and placing trunks in each other’s mouths. You may think their relationship is just a fling, but no, relationships between male elephants can last for years. Occasionally, one male often extends his trunk along the other’s back and pushes forward with his tusks. That is to signify his intention to mount, and this same-sex relationship is very common not with just males but also females.

Known as one of the gayest animals among other gay animals, homosexuality is very common with giraffes. Male giraffes have been observed to engage in high frequencies of homosexual behavior apart from their aggressive “necking”. After caressing each other with their necks, these long-neck animals court each other before they begin mounting and climaxing. In some herds, between 30% to 75% of the giraffes would engage in same-sex behavior. As for female giraffes, only one percent of same-sex mounting incidents occurred between them.

Both male and female lions have interacted with each other homosexually, and it has been a while already. Male lions are common in this case, and they are often seen pair-bond for a number of days. During those days, they initiate homosexual activity with affectionate nuzzling and caressing which is sweeter than most of us humans. Those affectionate activities often lead to mounting and thrusting, and the rest is history. As for the females, pairings between them are fairly common in captivity but not in the wild. In case you are interested, there is even a video of a lion threesome at Wuppertal Zoo.

You cannot miss penguins when it comes to a list of gay mammals or gay animals, homosexuality is very common among them. As a matter of fact, homosexual behavior among penguins is one of the most detailed study examples of gay mammals. Zoos across the world have reported male penguin couples that paired up, built nests, and substituted similar stones for eggs. Not to mention some male penguin couples even stole eggs from other couples in the wild, they take their relationship very seriously.

In a better case, a pair of male king penguins adopted an egg that had been abandoned by a female. They incubated the egg and raised the chick when it hatched, quite a little happy family that they built. There are these two female king penguins in New Zealand who have been in a relationship for 8 years. Surely their relationship lasts longer than most of ours, such an interesting case indeed.