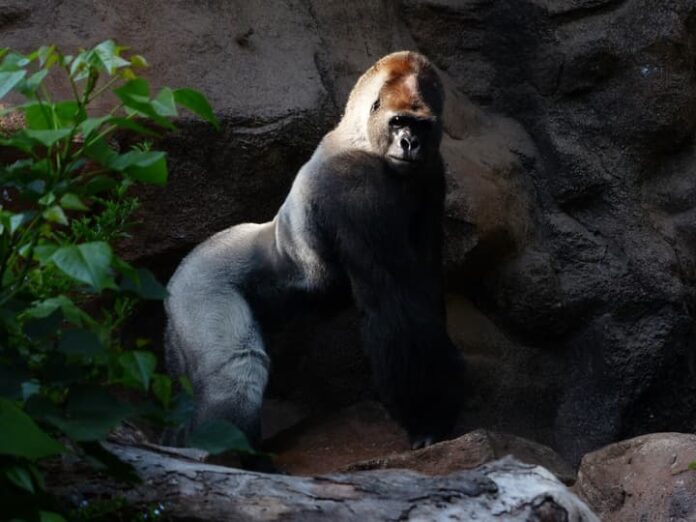 A silverback has long black hair with a silver saddle of hair on his back and hips. Also, silverbacks have shaggy coats that help to keep them warm in cold climates. Their thick fur allows them to live at high altitudes as well as in colder climates without a problem. An average silverback is up to 6 feet tall, and he can weigh up to 350 pounds. As the leader of the troop, silverback has a stocky build, muscular arms, and a broad chest. That makes them the largest gorillas among the primates and the perfect leader and protector.

Fun Fact: In case you wonder, no gorilla is born a silverback. Their silver saddle will occur at the age of 12, and that is when they become leaders. Younger male mountain gorillas are called Blackbacks because their silver saddle hasn’t occurred yet.

In general, silverback gorillas are shy, quiet, and gentle despite their incredible body strength. Each gorilla family has a silverback as a leader who scares away other animals. The silverbacks are only aggressive towards predators who invade their territory. When in aggressive mode, a silverback stands erect on its hind legs, tears and throws plants, and stomps his feet. In a more serious case, they will strike the ground with their palms and drum their chests with their hands.

Just like other great apes, silverbacks are intelligent primates. To communicate with others, they use a variety of vocalizations, gestures, facial expressions, and body language. At the same time, the silverback gorillas are also very responsible leaders and fathers as well. When a mother dies or leaves the troop, the silverback will look after the young ones. He even allows the young gorillas to sleep in his nest as well.

Fun Fact: Like humans, a silverback has 32 teeth but with very sharp canines.

Silverbacks are herbivores, so they eat a variety of roots, fruit, herbs, bark, and bamboo. To sustain its body, a silverback eats up to 66 pounds of food per day. That is why they spend most of their day foraging for food and eating leafy plants through their home ranges. Another interesting thing about them is that silverbacks rarely drink water. They hydrate themselves by eating moist plants and fruit which is a very unique habit to do.

The silverback gorillas live high in the mountains, and their home range is around 10 to 15 square miles. Since they are nomadic, silverbacks build new nests each day at dusk. They build their nest using bent branches in a tree or grasses on the ground. Once they settle down, they spend almost 13 hours sleeping and resting at midday. To bond with the members of the troop, a silverback forages, grooms, and plays with the other members.

Poachers are the only predators of this endangered Gorilla species. Poachers kill them for body parts to sell for traditional medicine and magic. As for their babies, poachers take them for the illegal pet trade. If not killed by poachers, a silverback sometimes gets caught in poacher’s snares for other animals. As for the threat, people have been destroying their habitat for farming land and trees for fuel. With the loss of habitat, human violence, and poaching, their population keeps on decreasing from year to year.