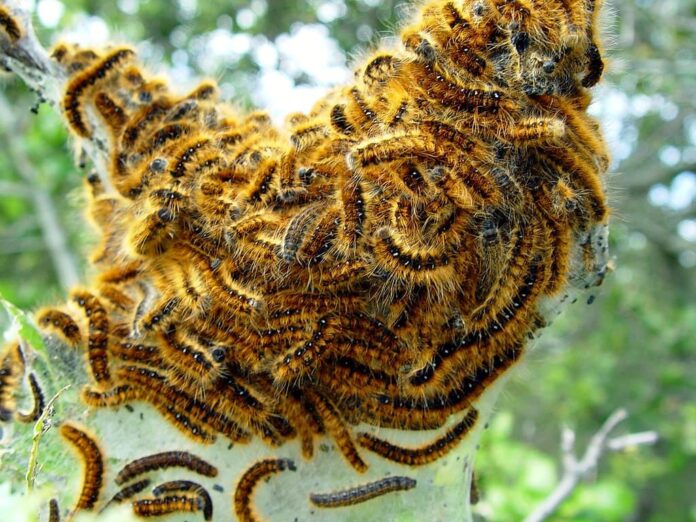 Animal infestations occur every year by the invasion of insects on a large field or crops or plants. When we talk about animal infestations, people often think about insects and pests at home. However, we are talking about something that is way bigger than that today. Most of the pest infestations and outbreaks that you are about to see cost million of dollars of damage to crops. You will find big animal infestations in the list below, so feel free to take a look.

Aphids suck, literally. These tiny bugs use their special mouths to suck the fluids from flowers and leaves of crops, plants, and vegetables. As sap-sucking insects, aphids are one of the most destructive insect pests on cultivated plants in temperate regions. These insects are wingless, but the females can produce a generation of aphids that are capable of flying. The infestation of aphids usually begins when the winged aphids start to find new host plants.

Those winged aphids fly to find a suitable host and then deposit several wingless young on the most tender tissue. Then they move on to find a new plant and repeat the same actions. The young will grow and mature between one week to 10 days, and they are ready to produce more babies. Aphids give birth to live young, and each female can produce up to 60 offspring without needing the male. This is how the infestation begins, and it affects to a wide range of plants.

Once the infestation starts, the plants may stop growing or have yellow leaves due to the lack of sap. In agricultural crops or gardens, the infestation affects beans, pumpkins, tomatoes, zucchini, and more. The yield will drop, and the plants will be damaged. There are over 500 aphid species, and 450 of them target fiber and food crops. Their large outbreaks can even cause allergic inhalant reactions in sensitive humans.

Armyworms are actually caterpillars, and they are the pests to cereal crops, grain crops, and grass pastures during wet seasons. These caterpillars usually appear in the soil or under debris in grassy areas, and they have wide diets. The single female armyworm can produce up to 2,000 eggs in her life, and each cluster contains up to 134 eggs. The young larvae feed on grass and grain crops like corn, and they crawl from field to field in large numbers.

There are 3 situations during armyworm infestations or outbreaks: in early spring, early summer, and winter. Their highly active feeding behavior leads to excessive consumption of plants and vegetation. They also feed on rangelands which are the essential food source for livestock in some areas, and breed there. Without control, they will emerge into adults in 6 weeks and then migrate downwind to develop eggs together; hence more outbreaks.

People usually call them BPH, and this insect species feeds on rice and transmits two viruses. Those include rice grassy stunt virus and rice ragged stunt virus which causes up to 60% of yield loss. The damages usually show symptoms such as browning, drying, and yellowing to the plants along with drying circular patches. As their population grows, you can notice the leaves of the plants turning orange-yellow before getting brown and dry. At a high level, the chances of crop loss especially rice can be 100% without the possibility of recovery.

Farmers and gardeners have been having problems for decades from the Japanese beetle infestation. The adult beetles of this species can eat so many plants, and their menu consists of over 300 species. By the look, those shiny metallic green bodies with copper-brown wing covers make them look attractive and nice. However, the large swarm of these shiny bugs can congregate in shrubs, trees, and other plants so fast that you can’t keep up.

Japanese beetles chew grass roots which cause the turn to turn brown and die. Apart from plants, the adult beetles of this species also feed on flowers by skeletonizing the leaves as they feed on the tissues. It is quite difficult to eliminate such animal infestation which is why farmers and gardeners should watch out for the signs. Early control and reaction help to protect the crops and plants while getting rid of the pests.

You can tell right away once leaf miners start to attack your plants due to the scary appearance they leave. The larvae of leaf miners are the ones who do the damage to the plants. Females use their ovipositor to pierce the leaf surfaces and deposit the eggs inside, and the larvae hatch within 10 days. These larvae live in the mid-tissue layers of a plant’s leaves, mining the nutrients out of the leaves and skeletonizing them.

The larvae mature within a few weeks, and they begin the egg deposition cycle when they emerge as adults. Without immediate action, these larvae will infest crop after crop until they are reined in. These pests are hard to kill because they live inside the leaves of the plants so spraying will not work. There are various species of leaf miners, and they can cause an infestation in gardens such as beet, boxwood, citrus, pea, spinach, tomato, etc.

When it comes to the worst animal infestations, locust infestation is always on the list. The outbreak of desert locusts threatens food supplies in various parts of the world especially Africa, the Arabian Peninsula, and Indian Subcontinent. These destructive migratory pests can travel up to 90 miles a day in a swarm of millions, destroying vegetation. The number is so large they can eat the same amount as 35,000 people eat every day. In 2019 and 2020, the damages and losses from locusts alone reached over $8 billion as the swarms kept on spreading. Locust infestations affect so many countries it is known as a plague which is one of the worst things to happen during Covid-19 pandemic.

Just like the name suggests, this insect pest targets bean plants so you will find them in places with beans. Mexican bean beetles stay on bean leaves in winter, and they begin to thrive as the weather gets warm. These beetles take around two weeks to completely destroy bean plants before laying as many as 75 batches of 600 eggs. Without elimination before the hatching, the Mexican bean beetle infestation will begin and the beans will be gone. They skeletonize the plants which can destroy the whole crop, and these beetles eat all types of beans. Although there are methods to control Mexican bean beetles, it is always better to detect them before they start breeding.

Specifically feeding on and destroying rice, these caterpillars can cause a lot of damage. Paddy swarming caterpillars skeletonize leaves and stem, and a swarm of these can invade a large number of crops overnight. As they feed, these pests cut off leaf margins, leaf tips, and the base of the plants. The infestation of paddy swarming caterpillars migrates from one field to another which can cause a great loss on the rice seedlings. This is among the worst animal infestations because they can cause an entire paddy crop to die within a few days.

This is the pest in cotton farming, causing a lot of damage just like most of the animal infestations on the list. The larvae of this insect are bore into cotton plants to feed on their seeds. The larvae then move from seed to seed in the boll, chewing the cotton as they move along. The infestation of pink bollworms can result in flower bud shedding, flower deformation, lint development reduction, and seed destruction. In worse cases, the larvae stain the lint as they burrow into the boll which makes the lint commercially unusable. Serious outbreaks of pink bollworm infestations cause potential threats to cotton production in many countries such as China, India, and more.

This is a pest bug species that are migratory that is widespread into crops in large numbers in favorable seasons. Rutherglen bugs are fast-moving bugs that can have up to 8 generations per year. An adult female of this species can lay up to 800 eggs on the flower parts, grasses, and soil. Rutherglen bug infestations are usually on canola, legumes, grain, safflower, sorghum, sunflower, and wheat. This can result in reductions or oil contents, oil quality, and yields of the crops and plants.

The larvae of tobacco caterpillars cause direct damage to a wide range of crops in the fields and gardens. In fact, they are the pests of cabbage, cowpea, cauliflower, pea, potato, and tomato. Young larvae feed by scraping the surface of the leaves while the mature ones damage both leaves and fruits. Since they are nocturnal, these larvae feed at night and they hide in the soil around the plant during the day. In severe tobacco caterpillar infestation, they can defoliate the entire crop overnight. Larvae make holes in the fruit and start feeding, causing the fruit to ripe prematurely, messy, and watery.

Both the whiteflies and their larvae such as the plant juices from the underside of the leaves cause plant weakening. Even worse, the infestation of whiteflies can cause great damage to flowers, fruits, and vegetables. These are more pests to garden and greenhouse plants rather than crops, but they are very difficult to get rid of. That is because these insects are resistant to synthetic pesticides which makes chemical control difficult. If you notice white flying insects around your houseplants, take action fast before they start breeding. These whiteflies are active during the day so spotting one is not difficult.

Related Post: Dangerous Insect Swarms That Can Harm You