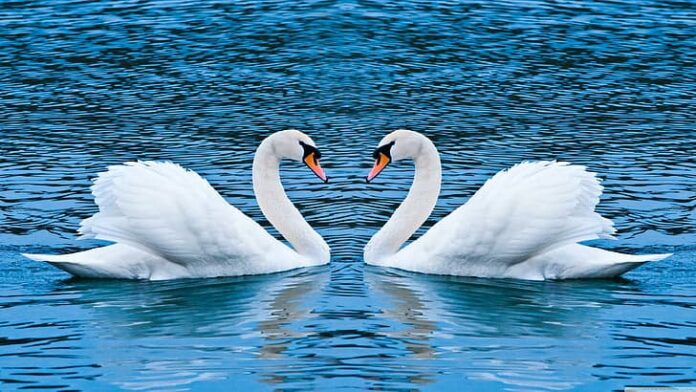 The fascinating part about this national emblem of the US is that they don’t stay together all year. Once they mate, they will build a nest together somewhere where the female lays the eggs. After their babies hatch, the parents fly solo for many months but they always return to their mates during mating season. Both partners return year after year to the same nest until one among them dies.

Bald eagles usually find a partner by the age of five, and they stay in that relationship for at least 20 years. Apart from being straight loyal monogamous, the male eagles are also good fathers. Male eagles always keep the eggs warm and feed the babies once they are born till they are able to fly. Hats off to such incredible birds.

Owls are remarkable birds that are notable for many things, and barn owls are very special among them. The romance of barn owls is undeniably sweet, and that is because they mate for life. But that is not all, the male barn owls pull out all the stops to impress their lady lovers. During courtship, male barn owls will go out of their way to hunt more in order to present their mate with extra food. By putting in so much effort, their relationship lasts for a lifetime in their little nest in the tree.

These little cuties are one of the rare mammal species that mate for life. Beavers are famous for their skill of building dams, canals, and lodges, but not for their monogamous status. So beavers live in colonies which are made by mated beaver pairs who raise their children. After about two years, those beaver children will move out to find their own beaver spouse. A beaver’s relationship lasts up to 20 years or even more as long as they live. Should the unfortunate happen and one of the beavers come to die, the remaining partner will seek out another mate.

Just like bald eagles, black vultures are faithful to their mates which is why they are one of the animals that mate for life. The only slight difference from the eagles is that black vultures hang out together all year round. One problem though, cheating might happen once in a while in some pairs which often results in an attack. The partner is not afraid to attack their lover if they caught philandering. Most black vultures are faithful to one another, and they stay together as well as share incubation and nestling feeding duties equally.

It is not a rich occasion to find a French angelfish alone, that is because they live, travel, and hunt in pairs. Their level of loyalty and commitment is that strong yes. Their bond of monogamous stays as long as both individuals are alive, and they only mate with their partner. Going to places in pairs and beautiful in both names and appearances, these fish are no angels at some point. Each pair is very aggressive especially when it comes to defending their feeding territory from other fish. At least they get to fight as a pair and stick together through thick and thin, cool right?

Gibbons are one of the animals that mate for life, and their bond is very very strong. These primates form extremely strong pair bonds, and their relationship can last their entire lifetime which is about 35 – 40 years. Gibbons are super cute, they care for their young together, take care of each other, and they hang out together. The couple will spend time grooming each other and often sing complex songs to literally express their love from the treetops. Just like humans, sometimes they dump each other if found philandering. But if they are together, they are together for life.

From cartoons to movies, the creators always depict wolves as tricksters and bad characters. In real life, wolves are not as bad as people portrayed them in movies. Plus, wolves are monogamous animals that mate for life which is more loyal than most human relationships. Mated pairs of gray wolves almost always stay together throughout their entire lives, and that is how they form their packs.

An alpha male and female start breeding at age two and then build their wolf pack by having a new litter every year. The pack consists of the alphas and their offspring which increases from year to year. Most female wolves can have babies until they die, so a pack of wolves can range from just a few to as many as 20.

Most penguins are cute and monogamous, Macaroni Penguins are one of the perfect examples of animals that mate for life. During October, these cuddly animals assemble in huge colonies to choose mates. When the mating ritual end, both parents will incubate the egg together. The male broods the chick while the female forages, returning, and regurgitating food daily. When October comes again, the penguins return to their previous partners and share the same parenting duties.

Before annual migration, sandhill cranes seek out a mate for their breeding grounds. These birds are monogamous, and they stay together all year round even during migration. The couple raises one brood each year, usually consisting of two or more chicks. Sandhill Cranes are famous for their courtship rituals where the males dance to impress the females. Once they are together, their bonds last until one of the crane dies which usually takes years.

One of the famous symbols of love is a pair of swans with their necks entwined in a heart shape. That is why swans are here on the list of animals that mate for life, but there are some exceptional cases. Swans do form monogamous pair bonds that last for many years or even for life; however, divorce and adultery do happen. As a matter of fact, there are certain species of swans that are unfaithful such as the Australian Black Swan and the Coscoroba Swan.

As for faithful swans, they mate for life. Mated pairs normally fly out together and return together during migration and other occasions. The husbands are great dads who help in incubation, raising chicks, and defending the nest. In case one swan dies, its partner may mourn or at least remain celibate for several seasons. Swans only find new partners if they fail in breeding or their partners die.