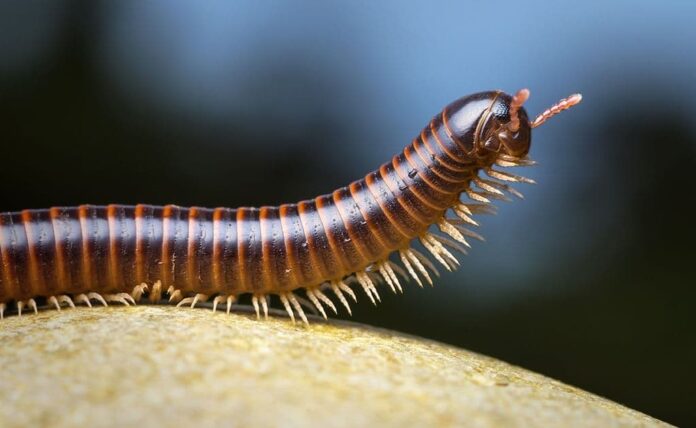 Creepy crawlies always give us chills with their little limbs, and these animals with the most legs are quite scary. It is pretty shivery to imagine those legs walking on our skin, right? Imagine no more because today we are going to get a closer look and learn more about them leggie creatures. Many of them are our worst fear, so it is nice to know some basic info about their lives and capability. There will be 8 of them in the list below, let me know which one you think is the most interesting.

We are talking about the family of eight-legged creatures like spiders, scorpions, mites, ticks, whip scorpions, and pseudoscorpions. Arachnids have eight legs and no antennae, and their body is divided into two main segments: cephalothorax and abdomen. In many arachnids, the cephalothorax and abdomen are broadly joined while others are joined by a narrow stalklike pedicel. Just like arthropods, arachnids also have an exoskeleton that they shed during their growing process. Many arachnids are helpful since they feed on pests and insects in the house. There are a few species that are harmful such as mites and ticks, the arachnids that transmit diseases to humans and animals.

Decapods, meaning 10 legs, are part of crustaceans that we are familiar with such as crayfish, crabs, lobsters, prawns, and shrimps. Each decapod has five pairs of thoracic legs connected to their elongated bodies with long abdomens. Their bodies are divided into three regions including the head, thorax, and abdomen. The head and thorax are covered by a single shield-like structure known as the carapace. As for their five pairs of legs, they arise from the thorax. The first two or three pairs of walking legs may have claws at their tips.

Decapods are very useful and appropriate models for many areas of biological research. At the same time, they are also important to many economies as well since they are tasty edible shellfish. Interesting and useful, such great creation from nature.

Look like insects, woodlice or roly-poly are actually crustaceans that are related more to crabs and lobsters. Also known as pill bugs and slaters, these crustaceans like to be in damp and dark places both in and outside the house. Woodlice are the only crustaceans that are adapted to life on the ground while the others spend their lives near or in water. In fact, woodlice breathe by using gills. Another fun fact about them is that they don’t pee. Woodlice get rid of their waste by producing a strong-smelling chemical called ammonia which passes out through their shells as gas. Two of their main predators are also the animals with the most legs: centipedes and spiders.

The fascinating thing about caterpillars’ legs is that they have true legs and false legs which is super unique. Most caterpillars have 3 pairs of true legs, and they have about 5 pairs of prolegs on their abdomen. The prolegs protrude from the caterpillar’s abdomen, and they help the caterpillar to grip surfaces like twigs and to aid in locomotion. Those false legs won’t be with them in adulthood as they become moths or butterflies. To predators, caterpillars are tasty snacks since they are rich in protein. That is why caterpillars have a number of self-defense such as appearance, chemical defenses, behaviors, camouflage, and more. To survive until adulthood is a challenging stage, caterpillars are one extraordinary creatures indeed.

Also goes by the name of garden centipedes, symphylans are soil-dwelling arthropods that resemble centipedes but smaller and non-venomous. This type of centipede can move rapidly through the pores between soil particles, and they usually live under the surface. Due to their habitat, their diet is mainly decaying vegetation as well as seeds and roots which is somehow harmful in agricultural settings. Garden centipedes have between 15 and 24 segments in their trunks, of which ten or twelve have a pair of legs each. These crawlies lack eyes; therefore, their sense organs come in the form of long antennae. Symphylans can live up to 4 years, and they molt throughout their life.

By the name, you can already tell that this creepy crawly is part of the family since they share the same roof with us. It is very likely to see them shooting across the floor and under the couch, but house centipedes are actually harmless. As a matter of fact, house centipedes are very helpful around the house. House centipedes kill pests in our houses such as bed bugs, roaches, moths, flies, silverfish, and termites.

Normally, a house centipede has 15 pairs of legs along with two long antennae on its head and two long appendages on its rear end. House centipedes are very fast when it comes to moving, and their long thin legs are the aids to their speed. The house centipedes use the two legs near their head that carry venom to hunt the bugs. Apart from keeping the pests out, house centipedes are also nice guests. They don’t eat wood or our furniture, and they don’t carry any fatal disease at all.

With many legs and fast-moving, centipedes are one of the scariest creatures that we don’t want to get close with. These thin arthropods have one pair of legs per body segment, and they always have an odd number of pairs of legs. That means no centipede has exactly 100 legs, how interesting is that right? The body segments of the males range from 87 to 171 while the females range between 95 and 179. The difference between them and the millipedes is that centipedes have a pair of venom claws. Most centipedes are venomous, and they could inflict a painful bite by injecting venom through their pincer-like. The bite may cause severe swelling, chills, fever, and weakness; fatality is unlikely for adults. Centipedes are fast and scary because their dozens of legs moving at the same time are not pleasant to watch.

There are many species of millipedes out there in nature, and they are the animals with the most legs in the world. On average, millipedes have about 600 legs which are still more than any other animals out there. Despite the fact that they have a lot of legs, millipedes are pretty slow because their legs are tiny. Millipedes don’t bite, they will curl into a tight ball to protect their delicate legs inside their body armor when threatened. With their lack of speed and inability to bite, their main defense mechanism is the ability to emit a smelly fluid. The fluid can irritate your eyes or skin, but it is not harmful. You may find them in damp spaces both in and outside the house because they require moisture to live.