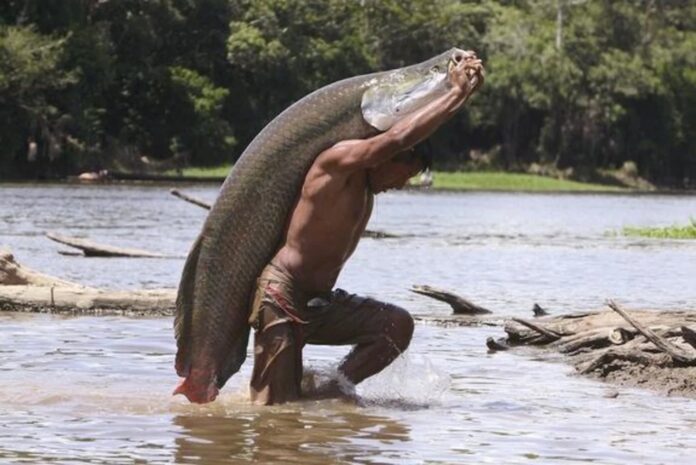 The taimen aka Siberian salmon is one of the largest freshwater fish in Russia, Siberia, Mongolia, and adjacent regions. Their large size is something, but the fact that they are ferocious predators is another thing. A taimen will explode out of the water to attack any mammals entering their water territory. This species has huge trouts, and the adult taimen frequently eat terrestrial prey like rodents and birds. Sometimes they prey in packs, hence their nickname “river wolves”. Their population has declined due to overfishing and illegal harvesting.

Carp fish is a very common fish that live in large and slow-moving bodies of water with soft sediments. This fish is so tough it can actually tolerate a wide variety of aquatic habitats. Carp fish are omnivores, and they can both eat aquatic plants and scavenge insects, crustaceans, crawfish, and benthic worms. In some areas, carp fish are common and popular food fish while they are considered pests in other areas. Depending on the species, the price and reputation of carp fish are different. For example, Japanese Koi Carp are among the most expensive fish in the world. That is because this species is a symbol of prosperity and status, and the price can be as high as a million dollars.

The large size allows Nile perch to be very aggressive hunters in the freshwater territory where they roam. You can find them in lakes, ponds, rivers, and streams throughout the Ethiopian Region of Africa, the Mediterranean, and the Nile Delta. The fish has large mouth with a protruding lower jaw that allows for easy hunting. Because they hunt almost anything, they have become one of the worst invasive species in the world. Wherever it is introduced to, it causes catastrophic declines among native fish populations. However, they are still an important food fish in Africa as well as a prized catch for sports fishermen.

Here you are looking at the largest freshwater fish in Europe whose small population exists in the Chernobyl exclusion zone. Apart from living in abandoned cooling ponds inside Chernobyl, they also live in warm lakes and deep slow-flowing rivers. Wels catfish has a large mouth that can swallow prey whole along with numerous rows of small sharp teeth. Just like most bottom feeders, this catfish feeds on anything they can find from frogs and ducks to aquatic birds. This large fish relies almost entirely on hearing and smell when they hunt for prey. During the breeding season, a female can produce up to 30,000 eggs per kilogram of her body weight. As for the male, he guards the nests until the brood hatches.

Due to their size, Mekong giant catfish tend to live in deeper areas of water. Because these fish are so large and quite tasty, people overfish them which leads to their population decline. The decrease in water quality due to development and upstream damming also plays a part in decreasing their number as well. That is why fishing for the Mekong giant catfish is illegal in the wild in Cambodia, Laos, and Thailand.

The resemblance of their appearance makes many people think that they are related to alligators, but that is not true. It is undeniable that alligator gars have a wide head and razor-sharp teeth which is scary to look at somehow. However, they never attack or harm any humans at all. Alligator gars are one of the largest freshwater fish, and they are ambush predators. An alligator gar has a long snout with two rows of fang-like teeth that use to feed on waterfowl and small mammals. Their method of ambush is to float a few meters below the surface and wait for unsuspecting prey to swim within reach.

Alligator gars are able to live in brackish and even saltwater. However, they prefer the sluggish pools and backwaters of large rivers, swamps, bayous, and lakes. Unlike beluga sturgeons’, the eggs of alligator gars are poisonous for humans to eat. In the past, people consider alligator gars as trash fish because they feed on game fish. As for now, they no longer hold that reputation because they have become one of the game fish for hunters.

Got the name from their paddle-like snout, paddlefish is a relative of the sturgeon and is among the largest freshwater fish. The paddlefish use their snout to dig in the ground to search for vegetation to eat. Despite the fact that they are big, paddlefish are actually very gentle. There are six species of paddlefish, four of which are already extinct. The interesting thing about them is that they have no bones. Their entire skeleton is cartilage just like sharks. More than that, their relation to the sturgeon also makes their eggs delicate among caviar lovers as well.

Often referred to as freshwater monsters, the Piraiba catfish is a large freshwater fish from the catfish family. As a matter of fact, this species is the largest catfish in the river due to their large size. Apart from the Amazon and Orinoco basins, you can also find them in tropical freshwater and brackish habits in South America. Because they are huge, the Piraiba eats literally anything they can swallow. That includes monkeys, birds, and even other catfish that are unfortunate enough to be smaller than them. There have been recorded incidents where these large fish have preyed on humans. In one case, a local fisherman was missing for days because he was eaten whole by the Piraiba catfish. When found, there were two legs sticking out of the fish’s large mouth. Neither the fish nor the fisherman survived the encounter, he suffocated the fish and the fish suffocated him.

Arapaima aka Paiche or Pirarucu is a unique air-breathing fish that is one of the world’s largest freshwater fish. Since these fish are air breathers, they can only stay underwater for about 10 to 20 minutes. That is why we can often see them near the water’s surface as they come up to breathe. Each time they breathe, they make a noisy and distinctive gulp that sounds like a cough that can be heard from far away.

Arapaima mainly feeds on fish by opening its large mouth and creating a vacuum sucking that pulls in nearby food. Apart from fish, they also eat fruits, seeds, and insects as well. The menu does not end there, they also use leap out of the water to grab birds, lizards, and even small primates. Arapaimas are considered an excellent food fish as they provide an important source of protein in their meat. The fascinating thing about arapaimas is that they not only grow very big but also very fast as well.

Also goes by the name Sturgeon, the Beluga Sturgeon is the largest freshwater fish in the world. This species belongs to the oldest group of fish estimated to be 200 million years old. The sturgeon spend most of their lives in freshwater environments such as river deltas and estuaries. Beluga Sturgeons feed on both freshwater and marine fish, baby seals, carp, herring, crayfish, gobies, and pike perch. The interesting thing about them is that they are euryhaline which means they can swim freely between salt and fresh water. A female beluga sturgeon can produce up to 12% of its body weight in caviar. Humans consider their eggs a delicacy, and it is the most expensive caviar and food item in the world. That is why overfishing for meat and caviar is the main and only threat to their population.