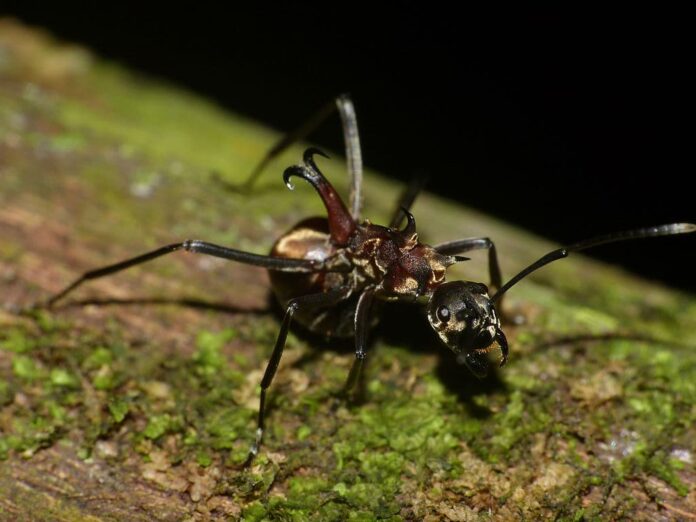 A couple of days back, I came across some pictures of fish hook ants on Facebook and I found them very interesting. Little did I know that the first discovery of these dangerous ants was actually in Cambodia, where I am from. So I did some research, and I am here with some basic information about the dangerous fish hook ants for you.

By the images and the name, you can already tell where these ants got their name from. The unique thing about fish hook ants is that there are 3 pairs of hooks on the curved spines of their body. Fish hook ants use these hooks as weapons to defend themselves from predators. When a predator bites or grabs the ant, those dagger-sharp hooks will dig into the predator’s skin.

Just like what a fish hook does, those hooks will not come out easily at all. Things apply the same with humans, these ants can also cut our skin and hold on. Oh, they have all day to hold on to you so getting them off is going to be very painful. Fish hook ants can grow up to 1.5 centimeters which is quite large for an ant.

All ants share one thing in common, they fight together if a predator attacks or threatens their home. When that happens, these ants will swarm thousands at a time and hook into each other using the hooks. Once they hook to each other, they create massive clusters which makes it almost impossible to separate them. The predator cannot target an individual ant, and that is how they chase the enemies away.

In case the predator tries to bite, the ants will jerk around and cut up the predator’s mouth. Or even worse, those hooks can stick in the throat of anything that tries to swallow it. This is a great adaptation that these ants have as the environment becomes harsh. Doing so is not only to protect themselves but also to grow the colonies and protect the queen as well. Fish hook ants don’t look for trouble, so they will not attack first which is a good thing.

These ants live together in colonies of millions in nests they build inside dead tree trunks on the forest floor. The first discovery of these ants was in 2007 in Virachey National Park in Cambodia. You will also find them in other countries such as China, India, Java, Laos, the Philippines, and Sumatra. This is also the reason why you should watch your step when walking near dead tree trunks in forests of these countries.

Fish hook ants are not picky, so they don’t have a strict diet at all when it comes to food. These ants eat almost anything that they can find from plants to other ants. At the same time, their role in the ecosystem is being scavengers. That means these dangerous ants also feed the remains of dead organisms and recycle nutrients back into the ecosystem. Also, they are able to obtain protein from dead organisms that they feed upon especially exoskeleton insects.

Despite being very dangerous, the fish hook ant does not stand on top of the food chain at all. That means there are some predators that are capable of eating them despite those sharp hooks. Their main predators are army ants, lizards, and insectivore birds. These predators keep the population of these ants in check which prevents overpopulation.

Fish hook ants are very rare species of ants, and their main threats are humans. The direct impact that humans causes on the ants is the deforestation of the rainforest. Because these ants build their nests in hollow dead trees, the clearing of those trees can destroy their shelter.