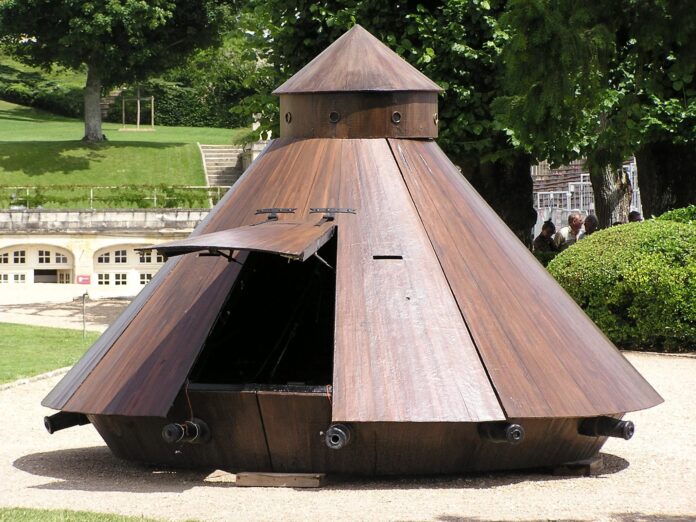 Many of us know about Leonardo da Vinci, and how creative and intelligent he was. This Italian man had invented countless inventions that help ease the living of people throughout the world. Without noticing, some of us don’t even don’t know what his inventions are while others thought he was just a great painter. Leonardo da Vinci was not only a painter but a polymath of the Renaissance.

This bright man had a wide range of interests including inventions, painting, sculpting, architecture, science, music, mathematics, engineering, literature, astronomy, and more. The surprising part is that he was very talented in every field of his interests, all of them. Among his works, Mona Lisa aka La Gioconda is the most famous painting in the world. However, today we are looking into his incredible inventions and designs that we use today so check them out.

Leonardo saw that the canons back then took far too long to load, and here comes more inventions. His solution to that problem was to build multi-barreled guns that the soldiers could load and fire simultaneously. His 33 barreled-organ featured 33 small-caliber guns connected together, and divided into 3 rows with 11 guns each.

All the guns on the organ would be loaded during the battle, and the first row of 11 would be fired. The platform would then rotate to properly aim the next row of cannons. He thoroughly thought through, one set would be being fired, one would be cooling, and the third would be loaded. The system allowed the soldiers to repeatedly fire without interruption while saving a lot of time.

Throughout his inventions and designs, the invention of Colossus is the dramatic and heartbreaking story of his attempt. Back in 1482, the Duke of Milan commissioned Leonardo da Vinci to build the largest horse statue in the world. Our man was never afraid of a challenge like that so he designed a 24-foot bronze statue of a horse. He then went to work on creating a clay model before he cover it in bronze which was not easy.

Because of the size of the statue, it required 80 tons of bronze with even thickness apply or it would be unstable. To do this, he used his experience in designing canons to invent a whole new mold-making technique. He also had to invent an innovative oven to reach the temperature needed to heat such a large amount of bronze.

After solving all of the design problems, he was finally ready for bronzing. Unfortunately, King Charles invaded France in 1494 so the Duke offered a bribe of Leonardo’s bronze to France to make canons. But still, French soldiers invaded Milan in 1499 which destroyed Leonardo’s clay model. The last thing Leonardo wrote about the Colossus was “I will speak of the horse no more.”

Later in 1977, a retired airline pilot and artist from Pennsylvania named Charles Dent decided to revive Leonardo’s Colossus project. He set up a non-profit organization to do so, and he spent the next 17 years working on it before his death in 1994. Finally in 1999, the horse was completed and given as a gift to the people of Milan, Italy.

It is true that Leonardo da Vinci had no boundaries of sky, land, or water when it comes to his inventions. Back when he was working in Venice aka the Water City in 1500, he designed his scuba gear. The purpose was to sneak attack enemy ships from underwater, and it was one of the best inventions ever.

The leather diving suit came with a bag-like mask that went over the diver’s head. Attached to the mask around the nose area were two cane tubes that led up to a cork diving bell floating on the surface. The diver receives the air from the opening of the tubes below, and the mask also had a valve-operated balloon. The diver could inflate or deflate the balloon so that they could sink or come to the surface easily.

In addition to that, da Vinci also designed a pouch for the diver to urinate in as well during long diving. His diving suit allowed men to engage in a little underwater sabotage by cutting holes in the bottom of the enemy’s hull. The sad thing is just like most of his inventions, this one was not well-known until his death.

Leonardo da Vinci understood psychology more than anyone else when it comes to weapons in warfare. He knew that the fear of weapons could instill enemies as much as the damage that those weapons could inflict. Da Vinci designed a giant crossbow for pure intimidation, and who wouldn’t be afraid of this dangerous-looking thing?

The device would have six wheels for mobility, and wood was the material for the bow to ensure flexibility. His crossbow was 24 meters across, and he designed it to fire large stones or flaming bombs rather than giant arrows. Speaking of a man with imagination, Leonardo brought his imagination to life via his illustrations which became realistic and plausible.

With the inspiration from bats and birds, Leonardo da Vinci designed a machine that allows people to fly. It is the machine where the pilot lay down in the center and pedals a crank to get the whole thing moving. Once in the air, the wings of each side then flap just like a bird in the air. Unfortunately, he then might have realized that the person could never have created enough power to get the machine off the ground. However, his drawings inspired people in the next 400 years to finally invent planes that could fly at great distances.

It is true that Frenchman Sebastian Lenormand invented the parachute in 1783, but the sketches from Leonardo were the first. His sketch was followed by the annotation that stated and claimed the theory of his idea. He was certain that there will be no injuries even if the person throws himself down from any great height. As long as the person uses the parachute that he had sketched, of course.

His parachute design was that the canopy was triangular rather than rounded which led to many questions. People doubted if it would actually have enough air resistance to float, and this one was not made and tested. So in 2000, a daredevil Adrian Nicholas constructed a prototype based on Leonardo’s design and tested it.

Despite skepticism from experts, da Vinci’s design worked as intended and Nicholas even noted that it had a smoother ride than modern parachutes. Looks like we should never doubt a genius man’s ideas, especially the ones of Leonardo da Vinci.

Leonardo designed the revolving bridge in the 1480s for Duke Sforza, the bridge allowed troops to cross rivers quickly. They could also easily pack up the bridge and transport it for reuse anywhere they would go as well. The mechanics of the bridge consist of pulleys and ropes, and it provided armies with the ability to move quickly. Da Vinci believed that it was one of the most important things in warfare.

Leonardo described the bridge in his notes as being light yet rugged, and it was one of several bridges he designed. He also designed another similar bridge for armies that was faster and easier for soldiers to cross multiple rivers. With these temporary bridges, armies could navigate unfamiliar terrain with less difficulty with ease in escaping from pursuing forces.

Back in 1495, he brought one of the greatest inventions to the delight of the court in Milan. The Robotic Knight was an early example of a humanoid automaton that mimicked Leonardo’s anatomical observations of human muscular structure. The Robotic Knight consisted of a knight suit filled with gears and wheels that connected to an elaborate pulley and cable system.

Through these mechanisms, his robot was capable of independent motion such as sitting down, standing up, moving its head, and lifting its visor. Then in 2002, robotics expert Mark Rosheim used da Vinci’s notes to build a working model of the robotic knight. With the inspiration, he designed the robots for NASA after five whopping years which totally worth it. So after half a century of space exploration, Leonardo da Vinci’s designs have finally made it into outer space.

Meanwhile, everyone was enjoying the horse cart and carriage, Leonardo da Vinci designed a self-propelled cart. The cart was capable of moving by itself from the power of coiled springs with steering and brake capabilities. His cart design was so ahead of time that its exact workings baffled scholars until the late 20th century.

The thing is that Leonardo’s cart was not for mass production, and it was not a passenger car. The cart did not have a seat, the purpose was to for a special attraction for Renaissance festivals. However, if you look closely you can tell that this self-propelled cart looks similar to the Mars Land Rover. Perhaps, his cart was the idea of the modern robot that we launch to other planets.

The tank aka armored car was one of the ideas from Leonardo da Vinci, but the design was different from modern tanks today. Leonardo’s armored vehicle had a conical cover inspired by a turtle’s shell. The covering was made of wood and reinforced with metal plates that add to the thickness. There were two large inside cranks that power the machine which was operated by four strong men.

This tank could move in any direction, and it was equipped with a large number of weapons. The design was to intimidate and scatter the opposing army, but it came with flaws. However, scholars suggested that Leonardo da Vinci inserted the flaw intentionally to discourage this war machine from being built. As time goes by, people began to study his design and build the tanks we see nowadays.