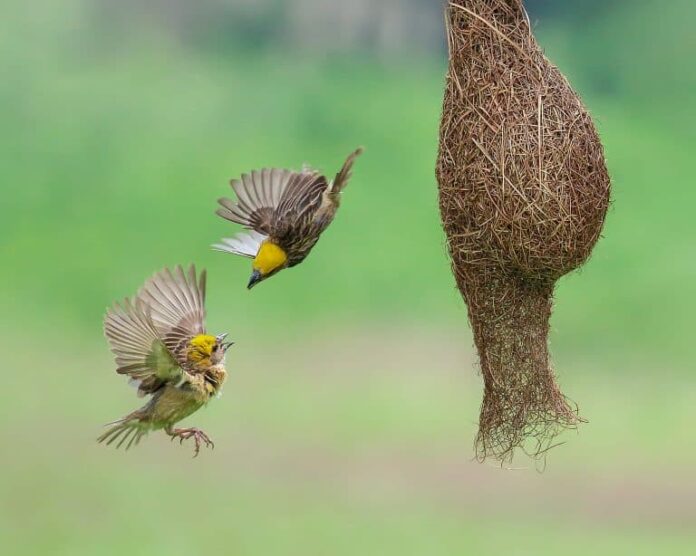 We all have our lazy days, but this case does not apply to hardworking animals in the animal kingdom. These workaholic animals work for hours a day, and they just never stop. Some work for people in their colony while others work to take care of their families. You probably have some industrious animals in mind, so let’s see what they are below.

Are there birds that never stop flying? Actually, yes. Most migrating birds spend most of their lives flying, and Alpine swifts are the most interesting of them all. These birds usually spend between 6 to 10 months flying south in winter. In fact, swifts are on the wings almost their entire life except for breeding. Even when drinking water, these industrious birds still remain on the wing which is quite spectacular.

Some species are not familiar with the ground at all, and they have very short legs that they use for clinging to vertical surfaces. Then how do they eat? Just like some other migrating birds, Alpine swifts catch insects in their beaks as they fly. That also means they feed on the wings as well. This leaves you with one last question, how do they sleep? The answer is the same, swifts can perform all vital physiological processes in the air, including sleep.

Fun Fact: Instead of endlessly flapping wings, Alpine swifts use air currents to glide through the air. This is how they manage to fly for months without the need to land.

When it comes to hardworking animals, ants are definitely one of the creatures that pop up in your mind. Ants never get lazy, and members in their colonies have specific jobs which they all stick to. All the female ants are workers, and these hardworking workers do everything for the sake of everyone. They forage for food and supplies, feed the larvae, take out the trash, and even defend the nest. Most ants you see are sisterhood because the male ants’ only role is to mate with the queen.

Besides being extremely hardworking, ants are also extraordinarily strong. Their muscles are thicker to their body mass compared to larger animals, allowing them to carry bigger and heavier objects. If we put this perspective as an example in a human’s case, it is like an average man carrying a car. This is why ants are able to build enormous nests thanks to the effort of millions of workers in the colonies.

Fun Fact: Ants don’t have lungs so oxygen enters through tiny holes all over their bodies instead.

There are many engineers in nature and the wild, and beavers are one of them. These industrious animals are famous for their ability to build canals, dams, small lodges, and more in rivers or streams. Beavers use grasses, moss, and woven sticks to plaster with mud in order to build their home known as the lodge. The lodge contains two dens, one for drying off the water after the underwater entrance and another for living and socializing. As for the dams that they build, they can be so big they cover a large area. The world’s largest beaver dam stretches up to 850 meters deep in the wilderness of Wood Buffalo National Park, Canada. That dam is visible from space, and that was how it was found.

Fun Fact: Beavers are excellent swimmers with the ability to swim underwater for up to 15 minutes.

With big ambitions, hamerkop has great commitment when it comes to building nests. These African wading birds work for hours each day to build huge nests for their young. A pair of hamerkops work together to build a strong nest with three tiers in total. The males will go out and collect the materials such as grass, reed, and sticks while the females put everything together. Then both of them use mud to cover and decorate the nest, resulting in 6 feet wide and 6 feet tall nest. The building process usually takes around 3 to 4 months, and the locations are on a cliff, ground, or tree fork.

Fun Fact: Hamerkops also involve in superstition as bad omens, and it is considered bad luck to harm or kill them.

We are all familiar with the term “busy as a bee”, and that indicates so much about how hard-working they are. A bee colony consists of a queen, hundreds of male drones, and between 20,000 and 80,000 female worker bees. With the largest population in the colony, worker bees forage for pollen and nectar, feed larvae, and defend the nest. Worker bees are the smallest, and their tasks depend on each member.

The special thing about bees is that our world wouldn’t be as beautiful without them. These hardworking insects do not only work for their colony but also contribute to the Earth, and that is called pollination. The wind plays a huge part in pollination, and so do bees. Throughout their lives, bees pollinate up to 70 of the 100 human food crops. At the same time, one colony can pollinate 300 million flowers each day.

Fun Fact 1: Bees do sleep, but there is no specific time because sometimes they even fall asleep inside a flower.

Living in a colony of between 2 and over 300 members, naked mole rats are sure hard-working. In the wild, these freaky creatures can dig a complex tunnel system with various chambers for multiple purposes. Their empire underground takes up to several hundred meters thanks to their teamwork. The fascinating thing about naked mole rats is that there is a caste system ruled by a queen in their colony.

Queen naked mole rats aren’t born a queen, they are females who have fought their way to the top. There are non-reproductive workers and subordinates who are responsible for digging tunnels and taking care of the pups. There are also soldier mole rats whose job is to defend the colony from predators (snakes) and foreign mole rats. As for the queen, she produces all the pups with the help of a few breeding males.

Fun Fact: A naked mole rat can move each of its front teeth independently like a pair of chopsticks.

Mostly known as pests, termites are not really insects that people are happy to see near their houses. These wood munchers are indeed one of the hardworking animals that literally never sleeps at all. By working nonstop, termites also eat nonstop because they need strength to build their mounds (nests). Termites always expand the size of their mounds, usually upwards, making it them look like buildings. One of the tallest termite mounds was in Africa with a height of 42 feet tall (18 meters).

In termite colonies, not only the workers are hardworking but also the queen. The queen of some termite species can lay between 15 and 20 eggs per minute which equals to over 40,000 per day. Queen termites can lay up to 10 million eggs per year, and they can live up to 50 years. This makes termite queens the insects with the longest lifespan in the world.

Fun Fact: Termites are highly nutritious food because they are rich in amino acids, calcium, fatty acids, iron, and protein. This is why people from many cultures eat termites for additional nutrition or cure for a sick pass.

One of the birds that can build some of the largest nests is definitely the weaver birds. These hardworking birds not only construct a number of nests but also incredible structures. Male weaver birds construct extraordinary nests during mating season in order to attract females. Sometimes a female approves of the nest right after she saw the basic structure of the nest. That is when she will help him to complete the nest before building a family together.

In some areas, you can see hundreds of nests hanging down from a tree branch over the edges of a river. That is because weaver birds live in colonies so they build their nests close together. On some occasion, all the males will work together and build a large nest that can house hundreds of birds instead. That one tremendous nest can fill up an entire tree canopy, and there are rooms for feeding, nesting, and sleeping.

Thanks to their strong beak, weaver birds are able to cut various plants for their nest building. The materials that they commonly use are leaves, roots, strips of grass, and twigs. These amazing birds can tie real knots using the nest materials to secure the stability of the nest. Most of the nests are cylindrical in shape, and the common entrances are very narrow and downward-facing. This is to prevent potential predators such as boomslang and Cape cobras from getting in.

Fun Fact: Red-billed quelea, a weaver bird species, is the world’s most abundant wild bird with a population of up to 10 billion. Some of their flocks are so enormous they can take several hours to pass.