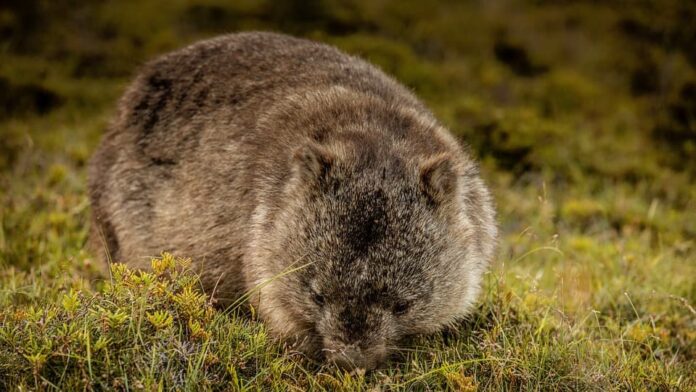 Wombats are super cute, and there are many interesting things about them. Just when we think that Australia is full of dangerous animals, wombats are one of the reasons to prove otherwise. A unique name with adorable features, no doubt why many people love wombats so much. You will find some fascinating facts about these fluffy marsupials today, and they are all in the description below.

Wombats have large and stocky bodies with short legs, short feet, and strong claws. Their compact head, large ears, short brown fur, and stubby tail make them look like mini bears. As quadrupedal animals, wombats walk and run all on four with a speed of 40 kph. Because they are marsupials, wombats have a pouch just like kangaroos except for the fact that their pouch is backward. This backward pouch helps to protect their young from dirt and soil when they are digging. Thanks to their claws and teeth, wombats are excellent diggers with the ability to excavate extensive systems of chambers and tunnels.

The interesting thing about them is that these mini bears lookalike have super strong rumps that they use as a defense mechanism. When threatened, a wombat will dive headfirst into the tunnel and block the entrance with its sturdy rump. This position also allows them to use their back legs and kick the predators away. As it mainly consists of cartilage, their butts are very resistant to scratches and bites. The awesome part is that they can crush a predator’s skull (mainly foxes) between their rump and the burrow’s roof.

Back in Ice Age, the ancestors of today’s wombats were the size of a rhinoceros which was huge. This also explains the fact that they are super strong despite their cuddly appearance that you see. Wombats can grow as big as a size of a dog, and the heaviest wombat was 38 kilograms. Just like rodents, wombat’s incisors never stop growing so they always munch on barks, grasses, herbs, roots, shrubs, and vegetables.

Generally, wombats are quiet and shy animals but they tend to be more vocal during mating seasons. Some wombats live alone while others are social and live in a group known as “wisdom”. At the same time, they can also make noises such as clicking noises, grunting noises, hoarse coughs, and low growls. If they get angry, wombats can also make hissing sounds to warn the intruders to stay away. Wombats are very aggressive towards intruders, both animals and humans. Since they have super sharp and strong claws, these marsupials are not afraid to use them even with humans.

There are reports of human injuries from wombat attacks, and the results were not pretty. Most of the attacks are bite marks and cuts that required hospital treatment. Wombats left deep bites, puncture wounds from their claws, and other injuries as they bowl over when they charge in. As territorial animals, they use their cubic poops formed by special backside bones to mark their rocks, territories, and trees. A wombat places a poop cube on fallen trees, fresh mushrooms, rocks, and other animals know to stay away.

These marsupials are herbivores so their diets consist of bark, grasses, herbs, roots, and sedges. Thanks to their never-stop-growing incisors, daily gnawing on tough vegetation is not a big deal for them at all. At the same time, wombats have special enzymes in their stomachs that help them to break down tough grub. As nocturnal animals, they forage and dig for food at night. They get most of their water from the food that they eat, and they can live without drinking water for years.

There are 3 species of wombats, and all of them are native to Australia but also found in Tasmania. Wombats live in burrows underground in forests, grasslands, heathland areas (shrubland), and mountains. Their burrows consist of many sleeping chambers and tunnels that can reach up to 200 meters (650 feet) in length. A wombat may have up to 12 burrows in its home range with 4 main burrows and multiple entrances.

Despite their strong rump, young and old wombats are vulnerable to a few natural predators in the wild. Their main predators are dingoes, foxes, and Tasmanian devils while eagles, owls, and quolls prey on the young wombats. Foxes and wild dogs also spread sarcoptic mange which is one of the deadly diseases to wombats that can kill the entire colonies.

The threats to their population are competition for food and habitat loss due to urban sprawl. Although protected by law in Australia except in Victoria, people considered them as vermin and kill them. Apart from that, hunting, rabbit poisons, and road accidents play a part in their population decline.