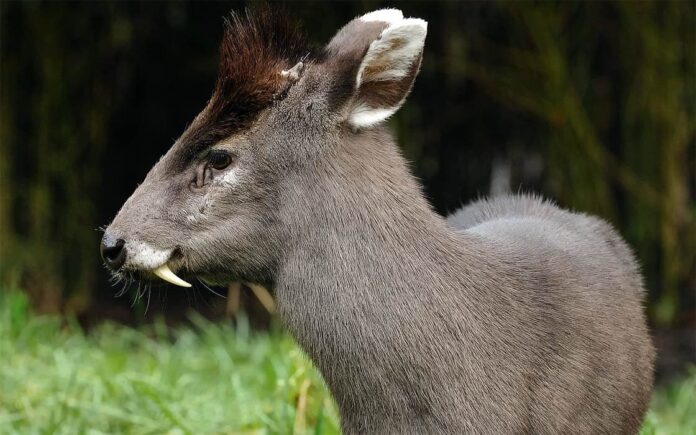 Maybe one day you wonder, so you search for deers with fangs to see if they exist. As a matter of fact, they do. Vampire deer do exist, and there are 4 species of them that roam in the wild nowadays. But don’t you worry, these deers are harmless despite the fact that they look quite scary. There are some interesting things about them that you might not know, so let’s find out together with me today.

Also known as Barking Deer, the muntjac deer is native to south and southeast Asia. Muntjac deer have a very unique and fascinating appearance especially their long pair of canines and antlers. Male muntjacs have small antlers that slope backward on top of their long fur-covered base called pedicles. Their antlers are usually straight with no branching which can regrow when they break them during fights. Speaking of fights, they tend to combat for territory using their tusks with other males.

These vampire deers inhabit deciduous or coniferous forests, preferably with a diverse understorey, as well we scrub, and overgrown urban gardens. Muntjacs are notorious browsers, and they eat shoots from shrubs, woodland herbs, and Brambles. Just so you know, muntjacs are very brave little deer who are not afraid to attack anything that threatens them or their young. In Britain, people considered them one of the most destructive animal pests. That is because they damage young trees and coppiced woodland, and they can even cause damage to cereal crops and orchards.

There are 4 species of musk deer, and each of which has fangs or tusks protruding from their upper lips. You can find them in mountain forests and dense forests of Asia, Russia, China, and the Korean Peninsula. Just like true deers, musk deers are herbivores as they feed on leaves, flowers, and grasses with mosses and lichens. Musk deers are mostly active at night, and they live alone. During rutting season, the males use their tusks as weapons to compete for mates. Just like their name suggests, musk deers have a gland that produces musk. That is the reason why people hunt them which leads to a decrease in their population. People use their musk to make perfumes fixatives and soaps as well as incense materials and traditional Chinese medicine since ancient times.

Got their name from the distinctive tuft of black hair on their forehead, tufted deers are among the deers with fangs. The unique thing about them is that this deer species has both antlers and fangs which is different from the others in the list. The male’s antlers are small spikes, and they rarely protrude beyond the tuft of hair. Tufted deers live in the south and southeast of China across to eastern Tibet, and in northern Myanmar.

These fanged deers love to live in high and damp forests near the tree line in both deciduous and evergreen forests. These deers are herbivores, and they feed on leaves, twigs, grasses, bushes, and other plants. The tufted deers use them to slash other males during territorial defense. The longer you look at them, the cooler they look. With cool hair and intimidating fangs, this tufted deer is definitely one of a kind.

There are two species of water deer: Chinese Water Deer and Korean Water Deer. Both species lack antlers, but they are equipped with a pair of prominent tusks aka fangs. The male water deer uses their long canine teeth to fight rival males for the right to breed with females, and that’s it. Just like other deer species, this one is an herbivore and they feed on plants, especially water plants. That is why you will find them in swampy habits like swamps, grasslands, mountainous regions, along rivers, and more. Water deers are solitary animals except during mating season, and the males are highly territorial and they mark their territory using scents. Their population declines because humans extensively hunt them for their meat and colostrum milk.