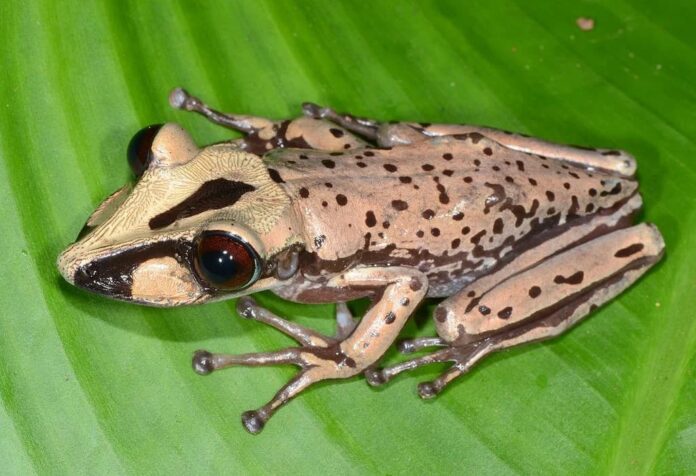 Scientists and discoverers make new discoveries every day, and venomous frogs are definitely the very fascinating topic to discuss. So far, we have the world’s first venomous frogs that have enough venom to end our lives if not treated on time. Poisonous frogs are already a common thing to know about, but venomous frogs? This is something that you really should pay attention to. Each of these species has tiny spikes on their heads that allow them to inject lethal venom directly into the bloodstream. Want to know more about each of them? Let’s find out together.

Goes by the scientific name of Aparasphenodon Bronoi, this species is the most venomous frog among the two in the list. Their natural habitats are subtropical or tropical moist lowland forests, subtropical or tropical moist shrubland, and intermittent freshwater marshes. The researchers discovered them in the dense vegetation of Brazil’s Atlantic Forest in Espirito Santo state. Compared to pit vipers, the venom of this frog is 25 times more poisonous you wish you were bitten by a snake instead.

Bruno’s Casque-Headed frogs have bony spines on their noses, jaws, and the backs of their heads. Those spines release and deliver the venom from the skin glands by jabbing and rubbing as they flex their heads to whatever grabs them. Alongside this amazing discovery, there should be research on anti-venom to these venomous frogs as well. However, the researchers mentioned that there are likely more species of venomous frogs out there awaiting discovery. So stay tuned.

In case you prefer their scientific name, you may call this frog Corythomantis Greenigi. This species prefers to live in semi-arid Caatinga region which is a type of desert vegetation, and rock outcrops. This frog species does not only secrete poison but also comes with weapons that can deliver the poison to victims. Took by surprise, researcher Carlos Jared learned that this frog species was venomous in a hard way while collecting them. He injured his hand on the body spines of the head of the frog, and the result was not so pleasant.

“Intense, immediate pain radiating up the arm, lasting for five hours.” said study co-author Edmund Brodie. Carlos was lucky because the species that injured him proved to be the less toxic of the two on the list. So the skull spines of these venomous frogs act as weapons to inject venom into their victims. Their method is by headbutting which is the same tactic as the above venomous frog species. The unique part about them is that these frogs can move their head from side to side without distorting their body position.