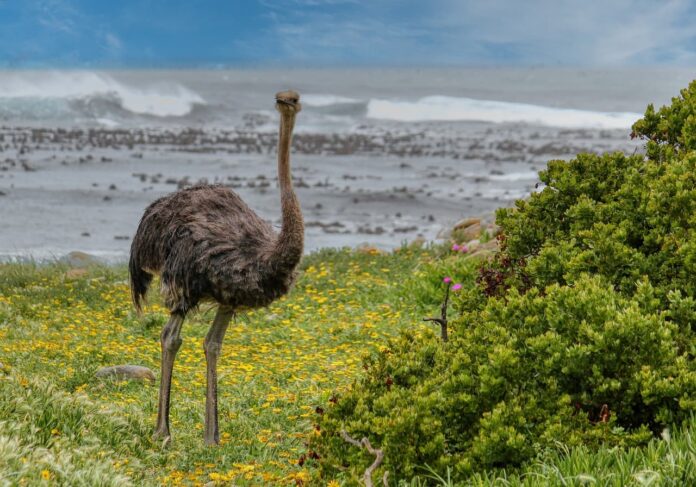 We are quite familiar with the heaviest birds, the fastest birds, and the like, but how about the tallest birds? This is exactly what we are going to discuss today, and some of them are way taller than you. There are certain birds that stand so tall, especially the ones that don’t fly. I am sure that you know most of the tallest birds on our list today, so let’s find out.

Marabou is the largest storks, and they live in both wet and arid habitats from the Sahara desert to South Africa. The interesting thing about these birds is that they also go by the name of Undertaker Birds. That is because of their shape from behind which are the cloak-like wings and back along with skinny white legs. In fact, some even regard them as one of the ugliest animals in the world as well.

Also, they are among the laziest birds since they spend most of their time just standing around. But things go differently when they eat. These storks are meat lovers who feast on carcasses and scraps of dead animals. Usually, they dine with hyenas and vultures along with other warm-blooded animals. The marabou storks can swallow up to 2.2 lbs of meat with a single bite. Apart from carrion, they also eat birds, fish, frogs, insects, reptiles, and rodents.

Also go by the name Manchurian Crane or Red-Crowned Crane, Japanese cranes are one fascinating birds. These birds are among the rarest cranes in the world, hence their reputation for being the symbol of fidelity, longevity, and luck. The Japanese cranes are monogamous, and mate for life which makes them a symbol of loyalty in some Asian cultures. You can find them on kimonos, scrolls, screens, porcelain, and even popular playing card brands since they are common motifs.

These cranes are active and social, and they often live in colonies or flocks. The Japanese cranes live in northern Hokkaido all through the year, and they breed in summer. In case of extreme temperatures, they stay warm by standing on one leg and protecting their body underneath one wing. As for the ones who live in Kushiro, they sleep standing up with one leg in streams with warmer water. Members of the group tend to wake up and sleep at different intervals. This is to make sure there is someone to guard and alert if there are predators.

Looks very similar to ostriches but smaller, greater rheas are also among the tall flightless birds. The unique thing about them is that they have long wings for birds that cannot fly. Rheas use these long wings to help them dodge predators and to balance and change directions while running. As the largest South American birds, they also have long and powerful legs as well. These legs help them to run while the wings allow them to flee in a zigzag pattern effortlessly. Greater rheas live in grasslands and semiarid scrublands, and they stay near lakes, marshes, or rivers, in breeding seasons. Their population faces a lot of threats because people eat their meat and collect their eggs for food.

Got their names from the white wattles that dangle from their throats, wattled cranes are the tallest cranes in Africa. Wattled cranes live in wetlands with shallow marsh-like habitats with sedge-based vegetation. These cranes mainly feed on aquatic vegetation, and sometimes they eat frogs, insects, rhizomes, seeds, small reptiles, snails, and tuber. Wattled cranes often submerge their entire heads underwater when feeding which is quite interesting. The funny thing about them is that you can tell the mood of cranes by their wattles. The wattle will shrink if it is nervous, and it will elongate if it is excited.

This is the tallest flying birds in the world, and they are also the tallest cranes as well. You can easily notice a sarus crane by the gray body, white upper neck, and red head. These cranes live mainly in wetlands such as canals, marshes, and ponds, and sometimes near humans. In the dry season, they will live in rice fields, shallow wetlands, or wet grasslands. Sarus cranes can be very protective especially when nesting because they are very aggressive toward intruders.

Usually, these cranes form large during the non-breeding seasons and the flock size depends on the wetland area. There are less than 1000 of them in Cambodia, where the population is the largest at the moment. Nowadays, their population is declining due to agricultural expansion, collision with wires, egg collection, habitat loss, hunting, pesticides, and wetlands drainage.

Here we have another largest flightless birds in Australia, but less dangerous. Because they cannot fly, emus have strong long legs that can go up to 50kph when they run. Another interesting thing about these tall flightless birds is that they are the only birds with gastrocnemius muscles. These muscles are the same as human calf muscles, and they locate in the back of the lower legs. Emus are very tough, and they have 3 toes on each foot just like the cassowaries; their closest relatives. If cornered, they will kick with their big three-toed feet. Also, emus are human fearless birds since they have known to approach small groups of humans to get any food they offer.

This is the bird with a reputation for being one of the most dangerous birds in Australia. In fact, cassowaries are also the heaviest flightless birds on that continent as well. There are species of cassowaries: Northern Cassowary, Southern Cassowary, and Dwarf Cassowary. You can never confuse a cassowary with any other bird because of its Jurassic pre-historic look. Being one of the most dangerous and tallest birds, the cassowary is not the type that you want to pet. They have heavy and well-muscled legs with three toes, and the inside toe bears a large dagger-shaped claw. The claw is the weapon that they use to attack, fight, and scratch, usually with the aim of the neck. This is why I always say that there are certain animals whose beauty is better admired from the distance.

We all know that ostriches are the tallest birds in the world, and they are very fascinating birds. The tallest ostrich can grow up to 2.7 meters tall which is huge for a bird. These flightless birds have long legs and long necks, and the males are taller than the females. Apart from being the tallest birds, ostriches are also the land animals with the largest eyes as well.

On top of that, they are the only birds that have two toes on each foot while others have three or four. Despite the toes, ostriches can run very fast with a speed of up to 40mph for a sustained period of time. Just like any other flightless birds, ostriches also fight with their strong feet by kicking. The kick is so solid it can kill a lion, one of the reasons why you should not tease them.