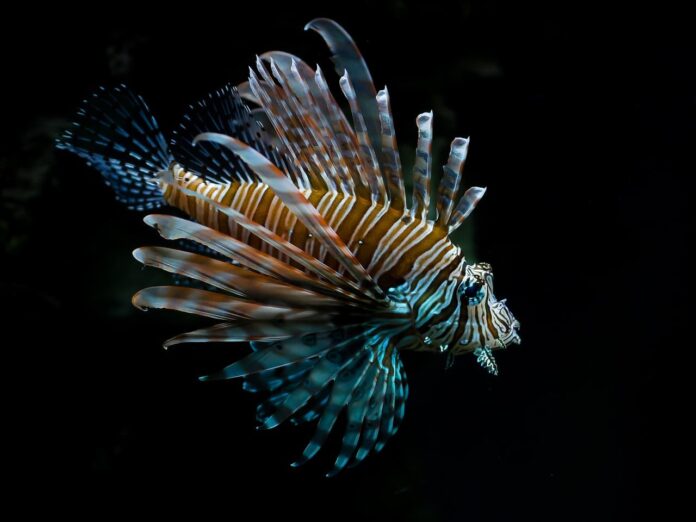 Each of them comes with a description of how harmful they can be to you along with their photos. Bear in mind that being attacked in the sea especially when you are far away from ashore is 10 times worse than on land. So remember their faces and stay as far away as you can from these dangerous sea animals.

I hope the photo gives you a proper introduction to the danger that this sea monster can cause. Barracuda is gifted with the super sharp teeth that allow it to cause serious injuries effortlessly. There are 22 more species of this nightmare, but the one that has the reputation to attack humans is the Great Barracuda.

On top of the sharp teeth that can leave the victim with deep gashes, Barracuda is also a fast swimmer as well. This type of fish usually lives in deep water, but there are also rare occasions where they leap out of the water with the thought of being a cute dolphin. They are strong enough to jump out and cause serious injury to people in the boat.

Notice that Barracudas like shiny objects like jewelry or diving knives since those items confuse them with prey. Also, don’t wish to eat them because their flesh sometimes contains ciguatera toxin that can cause serious symptoms that last for months.

Each blue-ringed octopus possesses a strong neurotoxin that is about 1200 times more potent than cyanide. The venom works by paralyzing the victims, that is why some victims did not even feel the bite. The venom can paralyze the lungs which causes the victims to suffocate.

The good thing about blue-ringed octopuses is that they look normal when not threatened. The blue rings will appear all over the octopus’ body as a sign of warning. If you don’t swim away by the time the sign is showing, you will responsible for your own consequences. Like I said, being attacked under the water is far worse; so be careful.

Looks like a plastic bag that floats, box jellyfish is so dangerous you don’t want to experience its venom. These bloody plastic bags sting, and the sting of them is the most powerful of all. You can find them along the northern coasts of Australia and tropical Southeast Asia. So far, box jellyfish have caused more than 60 deaths already just in Australia alone.

The worst part is that there are many causes when the tentacles remain attached to the victims. That tentacle can continue to sting even after the victims have left the sea, and that also leads to scars as well. It may sound phenomenal, but box jellyfish is a real nightmare of the sea.

Being the animal on the top of the food chain already shows you how dangerous leopard seals can be. Also, the leopard seal is one of the biggest seals in southern oceans, and they can weigh up to 600 kilograms. If the grown leopard seal opens its mouth, it is huge enough to fit a person’s head in perfectly. Plus, there are lines of big and pointy teeth set in the head awaiting to bite and chew so yeah, they are dangerous.

You can only find them in the frigid waters of the far southern oceans since they don’t come into contact with humans at all. However, there are still cases of leopard seals that have killed people. There are 2 famous occasions, one was the attack on Sir Ernest Shackleton, and the other one was the attack on Kirsty Brown.

The team of Sir Ernest Shackleton managed to shoot the seal dead after it followed him across and under the ice. As for the British scientist Kirsty Brown, she was not fortunate enough to make it. The seal dragged her deep underwater where she drowned. Be aware, and stay away; leopard seals hunt their prey with zero mercy.

Just because something or someone is beautiful does not mean that individual is nice, right? The perfect example is this lionfish that you see right here. It is one of the most beautiful sea creatures in the ocean, but its personality is not that nice. At a glance, you can see that the fish have spiky fin rays that make lionfish look extra elegant. Mind you, those spikes contai venom that can cause extreme pain upon contact.

“The venom will not kill you, but it will make you wish you were dead.” That was how Mike Ryan described a lionfish sting after his team tried to use their hands to hunt the fish by themselves. No matter how tough you are, always beware that lionfish is not something cuddly. Don’t touch it, and don’t risk yourself with such extreme pain.

Let’s not be strangers, crocodiles have been killers to many living creatures on earth for so long that it is not a surprise they are on the list here. Lethal on both land and sea, saltwater crocodiles are the largest of their kind and can grow up to 7 meters with weight up to 2 tons. Guess where you can find them, heck yeah AUSTRALIA!

With that size, saltwater crocodiles have the most powerful bite on our planet earth, 10 times stronger than great white sharks. Not to mention that they are also quick in the water since they can swim up to 18mph. Since they are good swimmers, they also swim away from their camp in Australia to nearby areas as well. You can also find these dangerous sea animals throughout Southeast Asia, and as far as west India.

Let me tell you a story of the saltwater crocodiles participating in World War II. Back then, Japanese soldiers refused to surrender and retreated into a crocodile-infested swampland which was surrounded by British marines. In only one night, hundreds of Japanese troops were killed by saltwater crocodiles. There were about 1000 Japanese soldiers who entered the swamps of Ramree in Myanmar that night, and only about 20 were found alive.

The word snake alone already tells us that the danger is nearby, let alone the snakes in the sea. Sea snakes are one dangerous sea animals that we have to avoid at any cost, and there are plenty of them in the sea. The thing is that animals adapt to their living conditions very fast. Some believe that sea snakes evolved from land snakes in Australia, the place where deadly animals go camping. Those snakes develop their huge left lung which stretches the most length of the snakes.

The grumpy look already tells you that the stonefish is not friendly and welcoming with strangers at all. Stonefish is the most venomous fish on earth, and its 13 needle-sharp spines along its back are the reasons why. The thing is that they don’t attack people, it is us humans who step on them and got stabbed by the spines on the feet.

The venom of stonefish is not dangerous, but it is unbelievably and incredibly painful to bear. Consider yourself lucky if you get stung on the feet, things will be a hundred times worse if you get stung on your body. The venom of stonefish can cause respiratory paralysis which can lead to heart failure. There have been victims who have begged for their legs to be cut off, so the pain is very serious.