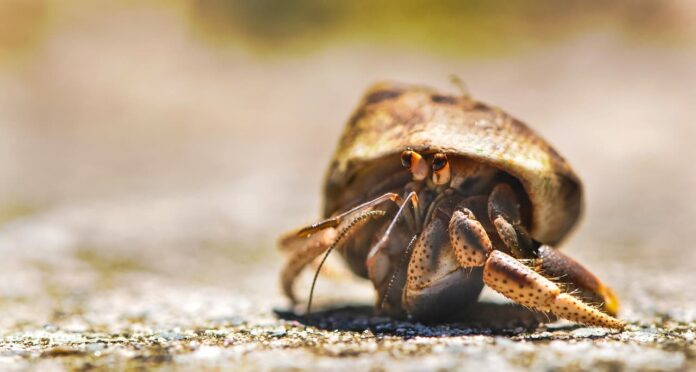 Hermit crabs are unique in the fact that they have a soft abdomen or tail which is folded up under the body. One thing that you should know is that the abdomen of the crab is not protected by its own shell. That is the reason why hermit crabs use empty snail shells as portable shelters and protectors.

But things don’t always go the way they want, there are fights between the hermits all the time. One hermit crab often has to fight with another one for possession of an attractive home. Things get scary sometimes when the home seeker pulls out the original occupier and eats it before taking over the shell.

So how do the hermit crabs get into the shell? One of the claws of the hermit crab is larger than the other. The crab uses this claw to stop the entrance after withdrawing into the shell. They also have the last two legs with roughened pads on their abdomen to grip the shell and hold the body in position.

Partnership Under The Water

There is always a fight in hermit crab kingdom, there is some friendship as well. Well, there is this kind of hermit crab that occupies a sponge that grows at the same pace as the crab. The sponge is known as “sea anemones”, and they are great partners with hermit crabs. The sponge takes up residence on top of the shells. So, the crab provides the sea anemone with transportation, and the sponge provides an extra shield against attack for the crabs.

I told you, nature is awesome!!!