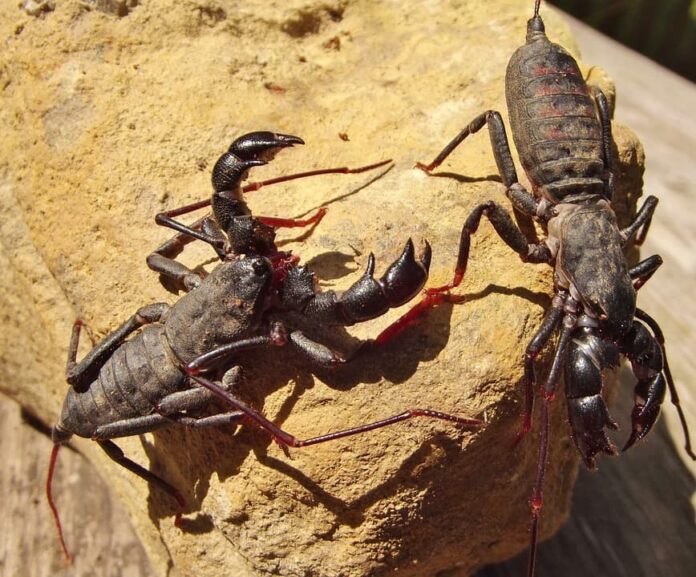 “Don’t judge the book by its cover” is the perfect phrase for these harmless scary looking animals we talk about today. It is normal to be afraid of animals that look less friendly, but their looks don’t define who they are. That my friends, is why we are here to introduce you to some harmless scary looking animals. Now that you know them, you won’t run away and upset these innocent animals anymore. There will be 10 on the list, let’s see if there are any of them that you used to be afraid of.

Basking Sharks are docile fish with scary-looking mouths but they are actually one of the harmless scary looking animals. Of course, they swim with their large mouth open which is very intimidating but they are neither aggressive nor dangerous. These sharks feed on small fish, and they never attack or prey on humans at all. Divers or swimmers can swim around or along with basking sharks with zero worries of getting attacked by one. This type of fish is very calm and friendly, so you don’t have to be afraid if you see one.

We all know the power of a crab’s pincers even if they are small ones, let alone a huge coconut crab. Coconut crabs are unique creatures with powerful claws that are powerful enough to rip open a coconut. On top of that, these crabs can climb trees and dangle from those trees for hours using their pincers.

Those powerful claws can grip you as strong as a lion’s bite, but they don’t use them on humans. As you can tell by the name, their main food is coconuts which they can independently crack open. In case you wonder how they get the coconuts, they can climb to the top of coconut trees and knock the coconuts off. If coconuts are not available, they can hunt and kill birds or pigs and even cannibalize other coconut crabs’ corpses.

Looks like a crocodile but is not, Gharials are harmless reptiles with long and thin snouts. These Asian crocs do not stalk and lunge at prey like other crocodilians, and they mostly prefer fish. Gharials’ snouts contain sensory cells that can detect vibrations in the water, and they grab fish in their jaws. As for those snouts again, are lined with more than a hundred teeth. Despite the fact that they have sharp teeth, Gharials never attack humans or other large animals at all. In fact, their jaw can’t hold any large animals let alone attack and eat one.

This is the type of animal that is feared by many of us, but let’s dig a little deeper with this one. Except being the largest of the 10,000 species of millipede, the Giant African Millipede is absolutely harmless. Despite the fact that they can grow very long and somehow look like small snakes, they won’t harm you. These millipedes can neither bite nor sting, and they coil their long body into a spiral shape when threatened.

Basically, the body of a giant African millipede has about 30 to 40 segments with 4 legs in each segment. That means a millipede has about 400 legs, and they usually live in moist soil under rocks of the rainforest. Also, millipedes breathe through tiny pore-like holes down the length of their body instead of lungs. After all, millipedes are one of the harmless scary looking animals that you can touch or pick up.

Was once thought to be poisonous beetle, Lobster Moth Caterpillar is actually harmless. The caterpillar has an odd appearance with a large head, long thoracic legs, and raised humps which is somehow very scary. These caterpillars are very strange to look at, but they don’t attack or cause any harm to humans at all. Also, they grow up to somehow a scary looking moth but still harmless.

Although the popular nickname of Manta Rays is Devil Rays, these rays are not harmful to divers or swimmers at all. The name Devil Rays are due to the two horn-like flaps in its mouth not the characteristics of the rays themselves. Manta Rays are the biggest rays in the ocean, but they are very docile and of course, harmless. By biggest, they can grow up to 9 meters with a weight of 9 tons which is humongous. Usually, Manta Rays are very curious so they swim around divers. The rays feed on plankton, and they are one super fascinating animals, aren’t they?

The deeper the ocean, the scarier the creatures look. Marine Hatchetfish is a type of deep-sea fish that live in the depth of the ocean. The frightening look does not define the real behavior of a marine hatchet fish. This fish species eats plankton, crustaceans, and tiny fish, sometimes they swim toward the water surface to find food. In spite of the bizarre appearance, this fish is nowhere near harmful to humans. As a matter of fact, they spend most of their time hiding at the bottom of the ocean.

Sharks depict a fearful image in people’s mindset, but not all sharks are dangerous. Sand Tiger Sharks are one of the harmless sharks and harmless scary looking animals on our list. Just like most sharks, this one also has sharp teeth and large in size. However, sand tiger sharks are very docile and safe to swim around. Their diet consists of bony fish, crustaceans, squid, skates, and other sharks. These sharks are nocturnal so they spend their daytime taking shelter near rocks, caves, and reefs, and they hunt at night.

Half scorpion half spider, isn’t that the worst nightmare of us all? Luckily, these creepy crawlies are among the members of the harmless scary looking animals club. Can’t imagine them being all aggressive, can we? Whip Scorpions use only 6 legs for walking while the other 2 super long legs serve as sensory organs. They are carnivorous that feed mostly on insects, millipedes, scorpions, worms, slugs, and other isopods. You can touch and catch them, and they pose no threat at all. Whip Scorpions are actually arachnids, but they are super harmless.