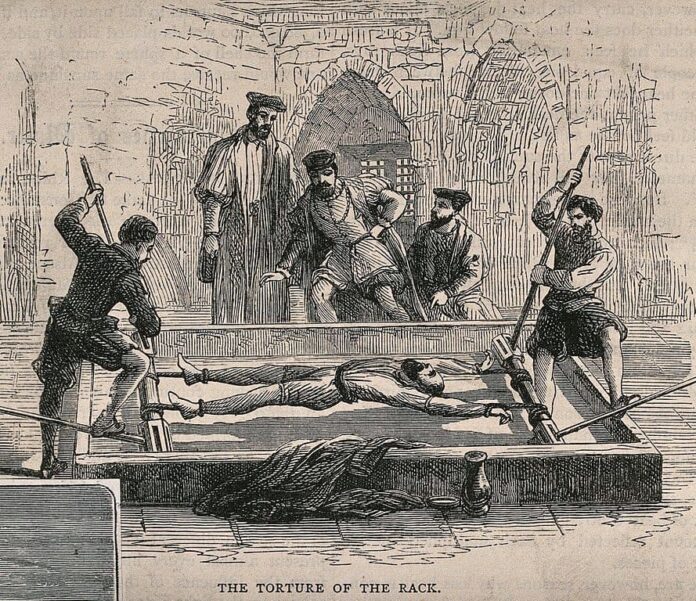 Goes by another name the Scold’s Bridle, the Brank was a mild form of torture compared to other torture devices. This device was to humiliate women who talked too much and gossiped with neighbors with no purpose other than to offend, ridicule, or lie. The brank was a metal mask that fit over a woman’s head which she wore like a Scarlet letter. The mask simply alerted everyone who saw her as to her transgressions as her tongue was separated from the mask and her mouth. That meant she couldn’t talk while wearing this device, and the punishment could last for a few hours to months. Even worse, there were severe cases where the woman had to wear the brank for the rest of her life. Attempting to get rid of it would also lead to more brutal torture and execution.

This device was not only for torture but also for capital punishment back in Medieval Europe and Antiquity. Also known as The Wheel, the breaking wheel literally broke you by breaking your bones. Commonly used on murderers or robbers, the torturers would tie the victims to the spikes of a large wooden wheel. As the wheel revolved, the torturers then smashed the limbs of the victims with an iron hammer which broke them in various places. This kind of torture may have lasted for days which resulted in a slow and painful death, but that was not the end. The body would be still on the wheel and put on display if the authorities felt the crime committed required further humiliation.

Came with a literal name that implied what it did, this is one of the most evil torture devices in history. In the 16th century, torturing women in the craziest and most brutal ways were very common and popular. The Breast Ripper aka The Iron Spider was the torture device that pierced a woman’s breasts before ripping them off. This device was a torture instrument mainly used on women who were accused of adultery or self-performed abortion. During the torture, the torturer heated the four claws of the device before ripping the women’s breasts. Some women died due to the excruciating pain or blood loss while the survivors would be disfigured for their life.

I am sure that you get the idea of what this torture device did by its name, it literally crushed heads. The head crusher was a big hit during the Middle Ages, and it was a formidable way to extract confessions. This torture device was scary and gruesome at the same, and it still caused scary damage. Once the torture began, the teeth would be shattered into the jaw before the victim slowly died in agonizing pain. Before he died, the victim had to experience having his eyes squeezed from his sockets first; man that was horrible. Let’s say the torture stopped halfway, the victim would still have irreparable damage done to the brain, jaws, and eyes.

Throughout history, there were many different variations of the iron chair depending on the region, and they are all creepy. The victims had to sit on the chair before the torturer set the chair on fire and roasted them alive. In a more brutal version, the chairs had tiny sharp spikes on the seat, armrests, leg rest, and back. That brass added more pain as the victims moved and squirmed with agony when the chair was on fire. The iron chair was used on convicted people or suspects because it instilled fear in a person. Torturers used this chair to get people to confess, and it was effective because it relied on psychological than physical.

Looking simple and all, Judas Cradle was one of the most fearsome torture devices in history. It is a stool topped with a pyramid instead of a flat surface that can rip the victim’s body open from their anus or vagina. The painful part was that this torture could last for hours or even days depending on the endurance of the individual. Sometimes in order to extend the victim’s pain and agony, torturers would often raise the bleeding victims during the night. Then they would continue dropping them down so that they could torture them again the next day. To quicken the death, torturers even added weight on the legs of the victims or put oil on the device to increase the pain.

This was a favorite device of the Spanish Inquisition, and they used it not only with the knees but also elbows, arms, and lower legs. With the design of two wooden blocks lined with large spikes and a pair of screws, this device could easily cripple the victims. The torturers loved to turn the handle slowly so that the claws would slam against each other and hurt the victims. As the spikes got closer, it would mutilate any skin and limbs in between slowly. The number of the spikes ranged from three to more than twenty from small to big in different spiky shapes. This torture device seldom provoked death, but it was often followed by other methods that would kill the victims anyway.

Duke of Exeter was the person to introduce this torture device to the Tower of London in the 1420s. Just like most torture devices on the list, this one was also for the extraction of confessions and incriminating information. The rack was a bed-like wooden frame that comes with a roller at one end or both ends. The victims would lie down on the device with their ankles and wrists secured by ropes wrapped around the bed’s axles. As the poles turned, the axles would also turn which dislocated the victims’ hips, knees, shoulders, and elbow joints before ripping them apart.

Such a fascinating name for such tormented torture devices during the reign of King Henry VIII of England. Looked so simple, the scavenger’s daughter was an A-frame-shaped metal rack that could cause agony pain to the victims. That loop at the top went around the victim’s neck and the crossbar at the bottom was for the ankles. This torture device would force the victim into a painful crouch if they tried to stand up. If they lay down, the device then pulled the body into a fetal position. In no matter what way, the scavenger’s daughter could crack ribs and breastbone or crack and dislocate the spine. It could also cause the blood to pour from the nose and ears as well; fortunately, it was not quite common in use.

Short and simple, the name of this torture device already suggests what it could do the moment you see it. Developed during the Spanish Inquisition, the tongue tearer was the means of ripping someone’s tongue out. The scarier part was that some even used it to slice the tongue in half or ribbons (forked tongue). With a simple design that resembles a large pair of pliers, the tongue tearer was one of the evil torture devices.