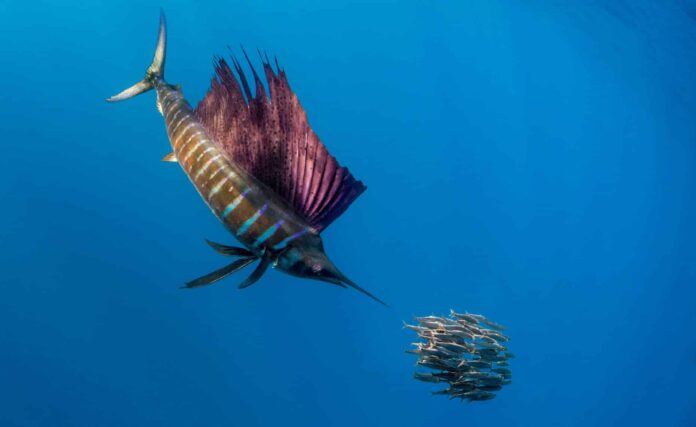 When it comes to the kingdom of water, fish is always the first creature we think of. Fastest fish is among the hot debatable topics that many people have discussed. We have cheetahs as the fastest animals on land, but how about the fastest fish in the water? I asked myself the same question, and today I am bringing you the list of the 10 fastest fish in the world. Each of them has great swimming speed, so let’s see which one is the fastest of them all. Feel free to take a look and share your thoughts.

With the fearsome appearance and ferocious behavior, barracudas are more well-known for those traits than their speed. The barracudas have snake-like body along with fang-like teeth which is similar to the piranhas. These opportunistic predators use their short bursts of speed as means to overtake their prey when they hunt. Not to mention they can kill and consume larger prey by tearing chuck of the prey’s flesh, this one is simply scary. Another thing to know is that barracudas are also dangerous to swimmers since they may mistake snorkelers for large predators. There have been reports of them biting swimmers, you should always be careful though the case is rare.

Might be just a simple toothless fish that swallows prey whole, tarpon actually has another interesting characteristic which is fast swimming. Tarpons can swim as fast as 56 kilometers per hour, either when escaping from predators or catching prey. Because they don’t have teeth, they primarily feed on sardines, shrimp, crabs, mullet, pinfish, catfish, and needlefish. They also scavenge for dead fish as well. That is not all, tarpon is among the very few fish that have a swim bladder. This swim bladder acts as a lung that allows them to breathe raw air out of the water. However, their ability to fight makes them more interesting that the way they taste. The fish is bony and they are not delicious, so fishermen usually release them after catching them. They’re worth fighting with which is why they are one of the great saltwater game fishes.

Just like the name suggests, this fish has so many bones in its body and that is how it got its name. Bonefish are relatively small, but they are very fast their average speed is around 64 kilometers per hour. This species usually travels in large schools up to 100 or more, and they all travel at the same speed. Their ability of swimming makes it easy for them to escape from their predators, mainly sharks and barracuda. Despite the fact that bonefish is one of the important game fish, they are too bony to eat.

Being the most common tuna in the Atlantic Ocean especially in warm temperate and tropical waters. The fish has a torpedo-shaped, sturdy, and robust body that allows for powerful and fast swimming speed. Tunny is an opportunistic predators, so they have the fighting ability that makes them excellent game fish. The interesting thing about them is the way we prepare them for consumption. The fish should be bled and iced as soon as possible after being caught. We can cook them in different ways but the best ones are Tuna Salad and Fresh Steaks. Sounds delicious, doesn’t it? Interesting and tasty, you might want to give them a try.

A fish that can fly and can swim at high speed, how cool is that right? Their capability of flying is from the streamlined torpedo shape that allows them to gather enough underwater speed to break the surface. At the same time, they have special pectoral fins that enable them to hide and escape from predators by leaping out of the water. Doing so allows them to take short gliding flights just above the water’s surface. Sadly, this incredible fish has become endangered because of overfishing as well as by preying on by other fish.

Reaching a speed of 70 kilometers per hour, Mako Sharks are the fastest sharks in the ocean. Their great speed gives them the ability to cause a number of incidents by attacking human beings on boats. Some of the victims were injured while others did not survive to tell the tale. The combination of their speed, power, size, and length of about 4 meters makes them one dangerous predators for us. On top of that, this cheetah of the ocean can also jump as it has been seen to reach 9 meters high out of water. Many sharks are dangerous, and the ones with such speed are one of the species for us to fear.

Got their name from the resemblance to a sailor’s marlinespike, Marlin is also one of the fastest fish. These species are incredible swimmers with speeds that can reach up to 80 kilometers per hour or even faster. Apart from being fast swimmers, they are also popular sporting fish in tropical areas as well. Marlins are wanderers, and you can find them worldwide near the surface of the sea. As for them being food, marlin appears mostly only in fine gourmet restaurants due to their high price.

Known to sports fishermen for their speed and high-quality flesh, wahoo is also a prized game fish. Their favorable great speed allows them to capture their prey very quickly due to their high speed in short bursts. That is not all, wahoo also has a fighting ability that makes them a great challenge in the sports fishing industry as well. Wahoos tend to be solitary, sometimes they occur in groups of two or three. While other times they can be in a school as large as 100 or more, and they all share the diet of fish and squid.

Some said that sailfish are the fastest marine animals in the ocean world. This fish species is not difficult to recognize due to its spectacular sail-like dorsal fin that covers nearly its entire body length. With the combination of their speed and teamwork as they often work together in groups of two or more, hunting is easy. The group of swift sailfish will thrash at and disrupt schools of smaller fish like sardines, mackerel, and anchovies. That makes it easy for them to snag and feed on their meals without a single problem. Sometimes sailfish also attack larger prey as well by using their spear-like bill to slash them. Not to mention they engage their huge dorsal fins to create a fence around their prey, so the victims won’t escape easily.

Seafood lovers would recognize this one right away since swordfish is a very popular seafood. The only thing that is not well-known enough about them is their great speed and swimming ability. Swordfish has a long and sword-like bill that it uses as a spear in order to slash its prey. At the same time, swordfish do not congregate in schools so the solitary males and females only pair up during spawning season. The fascinating thing about them is that they have been known to eat their own young due to a lack of nutrition. Swordfish are vigorous and powerful fighters, and they are one fish with great swimming speed to know about.