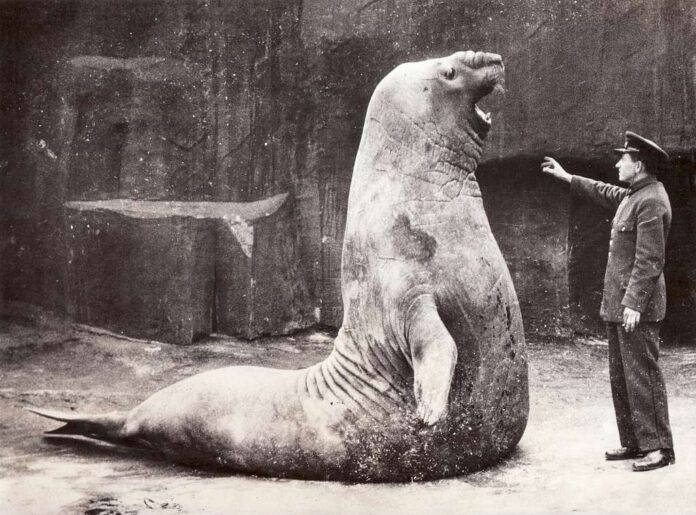 Have you ever wondered how large the largest seals are? I have the same question, so I did some research so that I can answer this doubt. Here I am, bringing the largest seals in the true seals family. True seals, also known as earless seals, are the true seal species; and there are 18 species of true seals. However, 5 species of true seals can grow so large they look so intimidating and scary for some to get close. Let’s find out together, shall we?

This is the species that are among the few types that can move gracefully over land and ice. Crabeater seals can move great distances on land whereas others can only travel like that in water. You probably think they love crabs, but no. Their main source of food is actually krill, and it makes up about 95% of their diet. Crabeater seals do most of their feeding at night, and they can dive as deep as 430 meters. The hunt can last up to 16 hours, involving hundreds of dives.

You can find them in Antarctica, and sometimes on the extreme southern coasts of Brazil, South Africa, Australia, and New Zealand. They are the most abundant large mammals on Earth, and they are the most numerous kind of seals in the world. They are not very large, so they are often preyed on by leopard seals, and of course, orcas. When feeling threatened, crabeater seals will snort, hiss, show their teeth, and roll over multiple times. There are about 7 to 75 million of them around the world, according to the estimation.

Bearded seals are the largest seals in the Arctic, and the females are larger than the males. The unique thing about them is that they have tougher skin than most other seals. That makes them a highly valuable resource for the Inuit who used their skin for daily used items. That includes shoes, dog harnesses, whips, boat covers, tent covers, and so on. Primarily benthic, bearded seals prefer shallow waters and they don’t dive very deep. These seals feed on a variety of small prey that can find along the floor. Their main food includes clams, squid, fish, and more.

The main predators of the bearded seals are polar bears, Greenland sharks, and orcas, and walruses attack the pups on rare occasions. Other threats include hunting (by native hunters), pollution, oil exploration, oil spills, increased human noise, coastal development, and climate change. Since they use the ice for breeding, molting, and resting, this species is very vulnerable to global warming. There are about 750,000 of them nowadays, and they live along the islands and coasts of Europe, Asia, and America.

With small faces and long whiskers, Weddell is the most adorable and beautiful species of seal. This species receives a lot of attention because of its physical characteristics. Normally, they spend most of their time in the icy cold waters around them. Sometimes, they lie on their backs on the ice with their front flippers over their stomach. Their mouths are open, and it appears that they are holding their stomach in laughter. That my friends, is why people adore them so much.

Cute with talent, Weddell seals can submerge underwater for up to 80 minutes at a time. Each time they dive, they can go as deep as 600 meters or even deeper. Just like other seals, this species also has excellent underwater vision as well. The interesting thing is that they dive deeper and longer during the day than at night. They forage for food such as fish, squids, prawns, cephalopods, and crustaceans. Sometimes they also chase and kill penguins as well. However, there is no evidence that shows that they consume the penguins after the killing yet.

During the early periods of Antarctic exploration, the population of these seals suffered dramatic declines because people hunted them for food and oil. At the moment, their potential threats are climate change and global warming, and their population declines when the temperature increases. Two other facts that harm them are the disturbance by vessel noise and a close approach by people. Weddell seals are in fact the second most abundant species of Antarctic phocid, after the crabeater seals. The most recent estimation suggests that there are the amount a million individuals in the wild nowadays.

Being the most aggressive seals in the family, leopard seals are extremely powerful seals and great hunters. They are the second largest seals, and they are the fastest seals among their species. These seals have very sharp teeth, and that allows them to consume smaller seal species and penguins. They often wait underwater near an ice shelf and snare the birds just as they enter the water after jumping off the ice. These ferocious predators may also come up beneath seabirds resting on the water surface and snatch them in their jaws.

You can find them living in the very cold regions of the Antarctic. Some of them prefer warmer climates so you will also find them in Australia, New Zealand, and South Africa. While most species live in large groups, this one tends to be alone or with just a few other seals. Leopard seals only come together in larger groups during mating seasons. The females will take good care of the young pups until they are able to care for themselves. Their only predators are some species of sharks and orcas. There are about 250,000 of them in the wild nowadays.

There are two types of elephant seals: the northern and southern; both of which are very large. If we talk about the largest seals in the world, the southern elephant seals are the winner. Elephant seals got their name from the large proboscis of the male which resembles an elephant’s trunk. The bulls use their proboscis to produce extraordinarily loud roaring noises, especially during mating season. The male elephant seals are way larger than the females, they can weigh up to 10 times heavier.

The elephant seals spend most of their time underwater in search of food. These seals can hold their breath for more than 100 minutes which is longer than any other non cetacean mammal. That is because they have a very large volume of blood that allows them to hold a large amount of oxygen for use when diving. They can dive as deep as 1,735 meters into the ocean to search for food. Their top favorite meals are skates, rays, squids, octopuses, eels, small sharks, and large fish.

The interesting thing about them is that they go through a process called molting. The process is when they shed the outer layer of their hair and skin, and it takes up to a month to complete. When it comes to molting time, they will haul out on land to shed their outer layer. During the molting process, elephant seals will not consume any food at all. The females and juveniles will molt first, followed by the sub-adult males, then the large mature males.

Despite their enormous size, elephant seals still have predators which are great white sharks, cookie-cutter sharks, and orcas. Before, humans were the main threat as they aggressively hunted them so close to the brink of extinction. The good thing is that their population has rebounded now under legal protections.