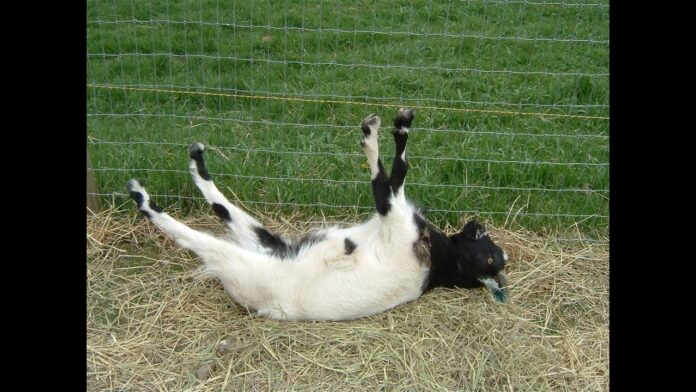 If you haven’t heard about a fainting goat before, you might want to watch their videos on YouTube now. They are the cute goats that simply freeze when people chase, shout at them, and pretty much anything. Sometimes these goats go stiff after bumping into each other when they run around with other goats. Fainting goats are quite funny so let’s learn some more interesting facts and information about them with us today.

Fainting goats are slightly smaller than standard goat breeds for meat production. They have large prominent eyes in high sockets that tend to protrude which is known as bug-eyed. Both bucks and does have horns, and these goats have great hair that can produce cashmere during colder months. As for their bodies, fainting goats have a broader build on the back and shoulders with more muscle despite their small size. The common coat colors of this breed are black and white, but other colors such as brown and coffee are also found.

The name seems to lead in a different direction because these goats don’t actually faint. When surprised, they often stiffen up and fall over; hence the other name “stiff goats”. The cause of this particular behavior results from a genetic disorder known as Myotonia Congenita. Simply put, the conditions of this disorder cause the muscles to contract and stiffen when the animals are surprised. When that happens, the goat usually freezes for about 10 seconds before they get up and run again.

Many people raise these goats as pets and breed them to maintain their behavior. Apart from being the distractor to the predators of animals on the same farm, these goats are pretty cute. It is always fun and nice to watch them run around and then suddenly faint. There is always one goat that faint more than the others, and that adds a lot of joy to the farm.

Raising fainting goats is very easy, and these animals have good behavior. On top of being super amusing, they are actually very great mothers. The interesting thing is that fainting goats usually give birth to twins or triplets known as “kids”. As they get older, some learn to stay upright when their muscles stiffen up. They won’t be able to move, but at least they don’t drop on the ground. This also shows that fainting goats are quite adaptive and intelligent as well.

As herbivores, these goats feed on broad-leaf plants, bushes, shrubs, trees, vines, and other edible plants. There are a few things that stiff goats avoid eating such as moldy and nightshade plants since those are deadly to them. Many sources lead their habitats back to Tennessee, and they are among a few goats that are indigenous to the United States. As a breeding species, their habitats are usually on farmlands and pastures with plenty of grass and shrubbery. Some farmers also keep them in the forests, marshes, mountainous regions, and woodlands.