Today at 7:32PM, MOAB (Mother Of All Bomb) was dropped by U.S military forces in Afghanistan. Noted that MOAB is America’s most powerful non-nuclear bomb, and this is the first time that this bomb has been used. The drop of this largest non-nuclear bomb hits ISIS targets as planned.

According to White House Press secretary Sean Spicer, “The United States takes the fight against ISIS very seriously.” He continued, “And in order to defeat the group, we must deny them operational space, which we did.”

U.S President Donald Trump said, “Everybody knows exactly what happens so, and what I do I authorized by military.” Following with, “We have the greatest military in the world, and they’ve done the job as usual so we have given them total authorization.” “And that’s what they’re doing. And frankly that’s what they’ve been so successful lately.” he continued. “If you look at what happened over the last 8 weeks compared to what really happened over the last 8 years, you’ll see the tremendous difference.” 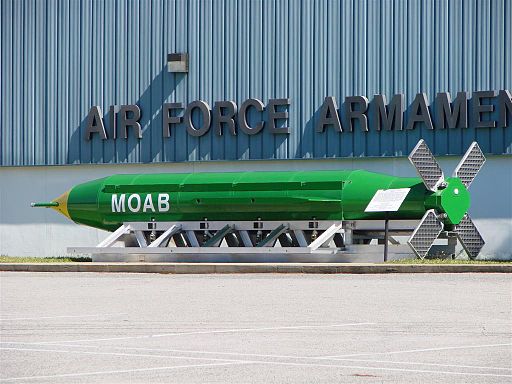 However, the extend of the damage and whether anyone was killed is still under estimation. Currently, the military is conducting an assessment towards this.
All we know about the power of the bomb is that it creates a blast radius stretching a mile in each direction. We’ll see what’s next.

10 Animals Have More Than Two Eyes That You Might Not...

Bebé - June 12, 2017
0
Having 2 eyes is not that impressive in animal kingdom for some of the animals have more than two eyes. These animals have multiple...

13 Most Dangerous Freshwater Fish That Can Kill You

7 Incredible Animals That Are Immune To Snake Venom

5 Biggest Nuclear Accidents In History Around The World

Bebé - May 29, 2019
0
Nuclear weapon is a very dangerous and destruction type of weapon that destroy anything it lands on. Things are not anywhere different when there...

Amphibian Fish: 9 Unique Fish That Can Breathe Out Of Water

10 Cute Owls That Will Totally Melt You Heart

Cambodian Passport Holders: How To Apply For Japan Visa

7 Dangerous Sea Snakes That You Should Stay Away From

5 Basics Facts About Water Snakes Out There

Mimicry In Animals: 6 Animals That Try To Look Like The...

10 Animals Have More Than Two Eyes That You Might Not...

13 Most Dangerous Freshwater Fish That Can Kill You

ABOUT US
whatdewhat.com is created with the purpose of exploring and providing unknown and most interesting facts about nature, universe, and life style of people.
Contact us: [email protected]
FOLLOW US
© 2019 WhatDeWhat